a super-simple guide to sorting out your finances with... claire hooper

"Stop waiting for a raise or a better job and start sorting your shit out now." 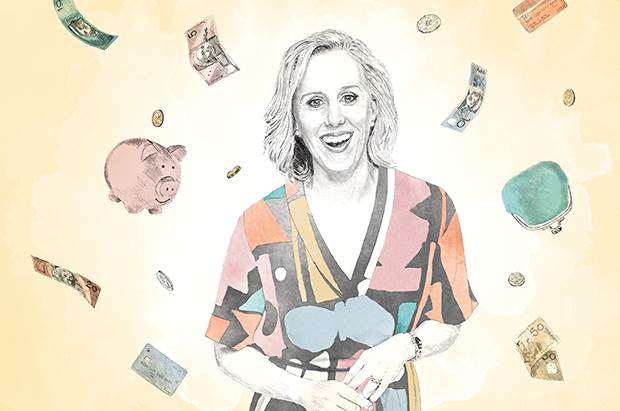 You’re you, regardless of how much money you have. Let's get this one out right at the top. Your bank balance isn't going to change who you are, in the same way that going to Europe for six months isn't going to make you a better person. In my career I’ve experienced some ridiculous fluctuations in income, but no matter how much or little I was earning, I continued making the same mistakes with my money. So stop waiting for a raise or a better job and start sorting your shit out now.

Budgeting is a necessary evil. Budgets suck. They're boring and you know you're going to break them within a week. But I really think everyone should give it a shot, even for a month. Just write down everything you think you’ll spend in that month, put it in a spreadsheet and see how it matches up with what you actually spend. I promise you will be shocked by where your money is going. It's a real eye-opener about the difference between needs and wants – the things that are totally justifiable in the moment, but in the long run could cost you an end-of-year holiday.

You’re probably paying the lazy tax. Most of the companies we interact with on a daily basis rely on us not asking for a better deal. Phone and internet; all forms of insurance; utility companies; mortgages – they can and will give you a better price if you ask for it. All you need to do is give them a call, say you're thinking about leaving and ask if they can convince you to stay. I hated this, because I'm awful at confrontation, but you can approach it politely – "I really want to stay with you" – and still get amazing results. I ended up saving more than $6000 a year, just by making a few uncomfortable phone calls.

Money mindsets are inherited. As humans, we're primed to think of our own attitudes as some universal truth, but, especially when it comes to money, they are 100 per cent the product of our family and culture. When I was growing up, we always had this sense that money, or even talking about money, was somehow evil, so I never thought to value myself properly, or take steps to improve my financial situation. Work out why you think about money the way you do and it can help you become more clear-eyed about your own finances.

An emergency stash might save you. There's only one certainty in this world: bad stuff is going to happen. You could become too ill to work or have a car crash that you're liable for. If you don't want this to become a life-ruining moment, start squirrelling away an untouchable emergency fund. This is a hard sell – it's like telling people to stop smoking because they might die in a few decades – but if you start now, you'll be ready no matter what crazy shit life throws at you. (On that note, consolidate your superannuation NOW. It literally takes a few minutes online and could save you tens of thousands of dollars in the long run.)

Debt is not your friend. The entire credit card industry is built on humans being shit at resisting temptation. That is why the average Australian has $4000 worth of credit card debt. If you're just ticking that over, you're never going to get anywhere. Make clearing your debt a priority and then never let it happen again. How? Learn patience. If something's going to be great today, it will still be great in one, three or six months when you can actually afford it.

Pick up a copy of frankie issue 84 to read more rad interviews with ace human beings. Nab a copy here, or subscribe from $10.50. Oh, and don't forget to get your ears around Claire's poddie, too. You can check it out via The Pineapple Project website, or stream it via iTunes (and other places, including the ABC Listen app). Lovely illustration by Cass Urquhart.

how not to get a shit job