"The one thing I could carry with me to start and grow friendships was music."

We’re a bit ashamed to say we’ve only just caught onto local indie-pop artist Merpire. Merpire, aka Rhiannon Atkinson-Howatt, has been an up and comer for the past few years writing warm, guitar-driven tracks and oddly relatable lyrics like “I’ve started missing strange things / Your spray deodorant routine.” We caught up with her to hear about her quarantine adventures and journey into making music.

Hello! Where are you quarantining from? I’m quarantining with my five housemates and a giant trampoline in Brunswick, Melbourne. I’m originally from all over Sydney.

How did you end up on the musical path? Moving around a lot as a teenager and into my early 20s, the one thing I could carry with me to start and grow friendships was music. Watching gigs, playing gigs, and asking to play with other people was and still is the best way to get to know the people and culture that make a place. It’s something that’s carried me through to where I am now, living in Melbourne with an incredibly supportive and motivated music community.

What was the writing process for your latest song "Heavy Feeling"? I remember being really down and tired. I was sitting on the couch where I usually write, staring at my bed in a numb state, just waiting for this anxious time to pass. They say anxiety can only exist in the past or the future, and a way to help you deal is to take note of what is happening at that moment so you can be as present as possible. What colours do I see? What can I hear, smell? The more present you are, the more you realise there is actually nothing to fear.

I started to write a journal entry of what happens on the days I wake up anxious. The lyric “In my pillow I hear them” is the negative or judgemental thoughts slowly waking me up. “Surely flowers won’t want to hurt me” is when I take myself for walks and stop to smell the roses, which forces me to take deep, full breaths. I’ve never sniffed a flower and not smiled ever so slightly afterwards.

This song didn’t need any fancy melodies or clever lyrics like I would usually try to do. The matter of factness about it is almost an anxiety exercise in itself. It’s funny, the more you yell “I’ve got a heavy feeling!” the less heavy the feeling becomes.

What have you learnt from writing about your anxieties? I don’t think I’ll ever “heal” myself from anxiety completely, but I’m learning with much research and help from friends and other artists, that anxiety plays a huge part in my songwriting. Without it, I wouldn’t write the songs I do. People suffering from similar thoughts wouldn’t find that same connection. It’s a cathartic gift that keeps on giving.

How are you looking after yourself in the pandemic? I’ve really cut back on social media and amped up the self-care. I read a lot. I do yoga with my partner every morning, write in a journal and am trying to accept the whole relaxing thing rather than feeling guilty for being lazy.

Are there any hobbies you've decided to try out? My housemates and I have been doing lots of Bob Ross paintings, which has been really fun and therapeutic. One of my housemates who’s also my videographer, Nick Mckk, just bought some rollerblades so he can do smoother shots with his camera. I tried out his blades and they’re so smooth that I’m on the hunt for an upgraded pair myself. I’ve got some skating dreams to live out when it comes to my music, but that’s all I can say for now!

What's your favourite original lyric? Probably this line from “Lately”: I’ve started missing strange things. Your spray deodorant routine. It would choke me in the morning while I was still trying to sleep.

What would you like to change about the music industry? As with most industries, there’s always room to improve. As much as COVID-19 has been devastating, with every tragedy comes a positive change, too. Many artists have been trying to tell the industry for a long time that long periods of touring can have a negative impact on an artist's wellbeing and mental health. As much as we miss playing shows and touring, the forced tour cancellations are forcing the industry to find other ways of creating success while allowing artists more physical rest.

What's next for you? While in isolation, I’ve co-produced a song with Feelds who is also my partner and producer. We’ll be releasing it together soon. This downtime has allowed for much planning and development that I’ll be sharing in the coming months, too.

If you could live in a castle anywhere, where would it be? I would live in the Scottish countryside on an ancient mountain with a bunch of friends. It would have a world-class, well-respected recording studio with the best sound and an immaculate garden to frolic in between takes. 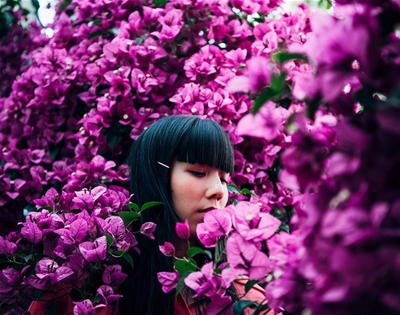 tunesday – a playlist for night owls