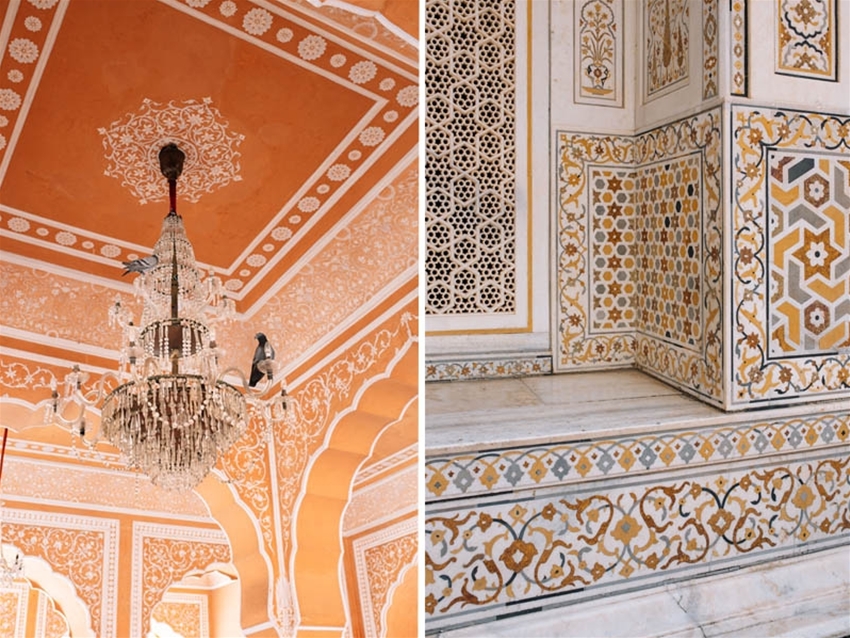 the patterns of india

Are your peepers ready for a visual feast? Photographer Phoebe Powell recently took a trip to northern India and captured a whole lot of beauty, both natural and manmade.

Are your peepers ready for a visual feast? Photographer Phoebe Powell recently took a trip to northern India – specifically, the cities of Delhi, Agra and Jaipur – with small group tour company G Adventures. She had her trusty camera in tow, and captured a whole lot of beauty, both natural and manmade. What really stood out, though, was the overload of embellishments, pattern and colour at every turn. Here, she gives us a taste of her eye-pleasing week. 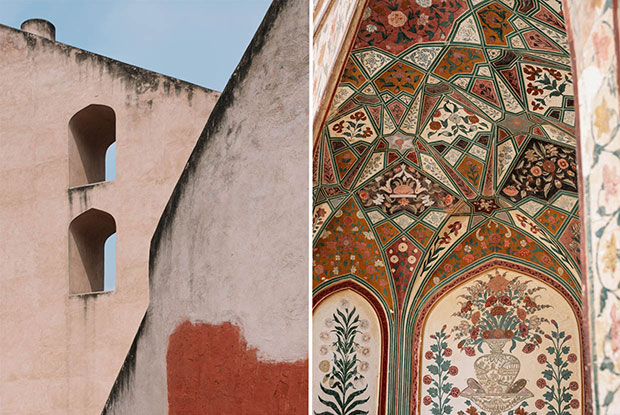 What surprised you most about your trip to India? Every inch of India is so full of life, and even after being there for more than a week, I found myself stopped in my tracks witnessing something bizarre and surprising all the time. As a photographer, I was on a total photo moment overload and had my camera glued to me at all times. Some of the unforgettable things I’ll never forget were being chased by monkeys, and when I’d ask to take someone’s portrait and they’d respond by asking for a ‘tourist selfie’ with me. I guess that's a fair trade!

How did the architecture differ in the three cities you visited? Delhi’s streetscape is studded with temples, forts, gardens, tombs and a 32-metre-tall monument of Hanuman the Hindu Ape God. It’s a city of old and new, and the ancient sanctuaries are filled with high dome ceilings, kaleidoscopic window embellishments and colourful marble floors. Back on the streets, I loved the block colours, carved doorways and walls painted with layer upon layer of pastel shades, all peeling to reveal the preceding colour.

Agra has a steady flow of punters ticking off their bucket lists with the Taj Mahal, which is a massive architectural focal point. Its marble domes catch the morning light and the entire place glows at sunrise. Everything happens at street level in Agra, like a street theatre is showing right in front of you. People brush their teeth, have their hair cut by a local barber shop (which is literally a chair and a mirror on the sidewalk), fry samosas, and it seems like everyone is constantly chatting. The ground floor of most buildings is fashioned into some sort of store, and very few have windows or doors. Every morning the roller door is opened and the whole shop spills out into the street.

Jaipur feels like the jewel of India. Its an entire city of pink and terracotta, with imperial palaces and watercolour forts lining the surrounding mountains. City Palace still houses India’s royal family, so the halls are painted and repainted, the chandeliers are dusted, and pigeons shooed. The domes and archways are illustrated with blossoms, birds and fruit, so beautiful I could peel the patterns of the walls and wrap them around me in some sort of spring outfit. 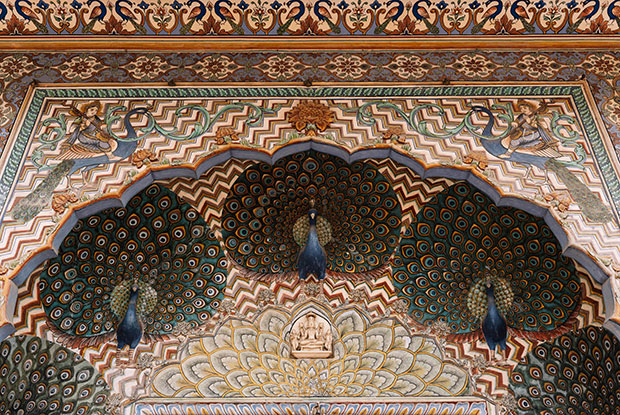 Are there any shapes or colours you saw over and over again? I’m a big fan of clashing patterns, so I was thrilled to see it being mastered hundreds of years ago in India. The geometric mosaics are complemented by ornate florals carved in marble, that are framed with colourful jewelled pillars, and each colour is a crafted piece of precious stone. The Islamic Arch, Hindu Swastika and Star of David are often all incorporated in the same rich red sandstone carving, which is symbolic of the many spiritualities within India. Also, once you spot one embellished elephant trunk shape, you’ll begin to notice how often the trunk is snuck into intricate marble and sandstone carvings.

Did you learn anything about the way these tiles and murals were made? When visiting places such as the Taj Mahal, we learnt that the artisans behind these brilliant structures are largely anonymous, and it’s the architects and Maharajas who are remembered for the work. Workers painstakingly chiseled away at marble and sandstone for decades.

India is famous for its vivid sandstone and each city we visited had a proud fort standing strong after hundreds of years. What was really surprising to learn when standing in one of these ornate fortresses is that originally it would have been gold-plated floor to ceiling, but when overruled, the gold was melted off the walls in a huge fire and collected. If it wasn’t gold, it was decorated in vibrant paint, and if you look close enough you can see tiny flecks clinging to the stone. 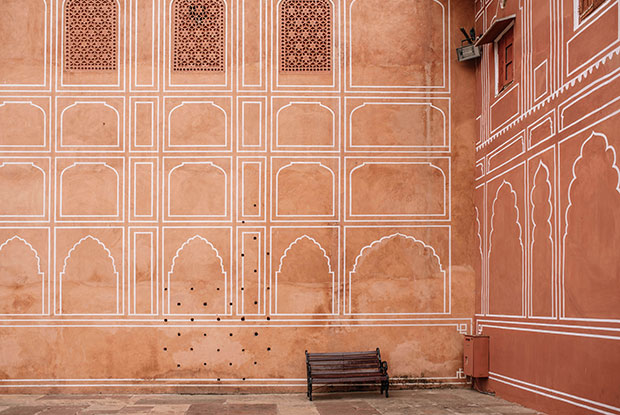 What would you tell someone who’s never been to India?  Nothing can prepare you for Delhi, and it’s generally where you’ll disembark your plane. You’re surrounded by the standard trappings of an urban city, with its whopping 19 million people, but it’s a big city that feels like a jungle. You’ll spot thieving monkeys, eagles swooping down on unsuspecting squirrels, hairy pigs, territorial dogs, the odd cat, buffalo, horses, goats and cows... so many cows! Its laneways are chock-a-block with a strange hierarchy of cycle rickshaws giving way to auto rickshaws, that make way for cars, who are giving way to trucks and buses, that most importantly swerve and brake for the holy cows.

You visited India as part of a small group tour with G Adventures. How did that differ from travelling alone? Being on the tour definitely made the experience. All the logistics were sorted for me, like how to get from A to B, where to sleep and the best places to eat along the way. The time I would usually spend booking and researching a trip (not to mention getting lost) was instead spent completely immersed in the adventure. I have done a lot of solo travelling and, as much as it's super rewarding, it was great sharing the experience with the hilarious bunch of legends I met on the tour. I could also relax knowing I was in safe hands.

After busy days being taken to the best spots by our tour guide, we would get together again each evening to share delicious curries and reflect on the day. Travelling with the group allowed me to enjoy things I wouldn’t have been able to if I were travelling alone. There was always someone eager to go on a hunt for textiles in Jaipur, or explore the laneways of Agra to take portraits. Our group chat is still abuzz with photo sharing, and it’s pretty great knowing I now have some friendly faces to visit around the world.

What was your favourite place? There were so many highlights, it’s hard to pick a favourite. Perhaps the cow-dodging Jeep ride up to the golden Amer Fort outside Jaipur and seeing its Mirror Palace that glistened in the sun. I’ll also never forget the night we spent in safari tents in rural Dhula Village, and the morning cycle around the farmland that finished in the pastel peach and yellow home of our tour leader for a cup of strong, sweet chai and an introduction to his cows and goats. I’ve learnt that tea is absolutely at its best brewed for a long time in a pot on the stove, and now I want to paint each wall in my house a different colour. 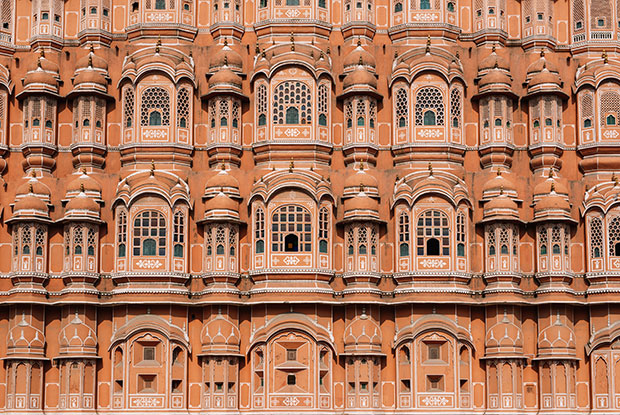 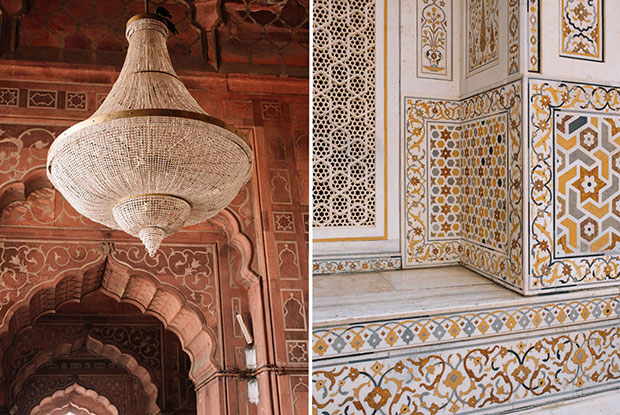 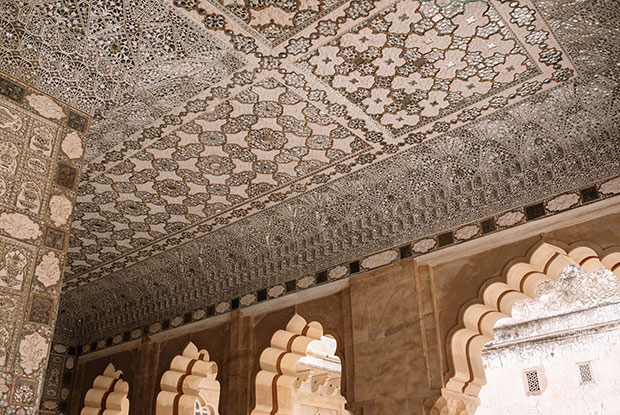 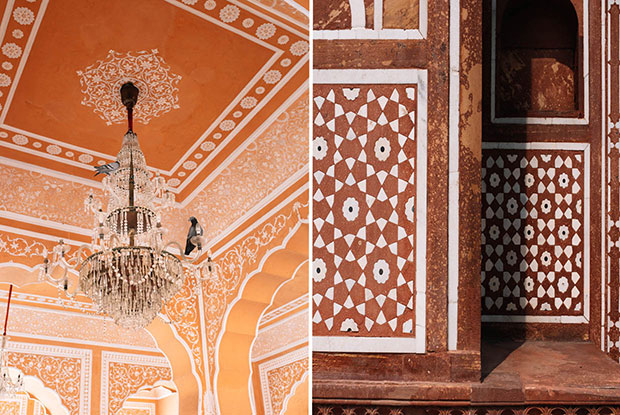 Phoebe visited India on the Golden Triangle tour thanks to our pals at G Adventures – a small group travel company and social enterprise. If you’d like to see these glorious structures with your very own eyes, you can find out more about the tour over here.

And while jetsetting around the world is on your mind, don't forget G Adventures have an awesome trip to give away to one lucky frankie reader! Pop over this-a-way to enter. 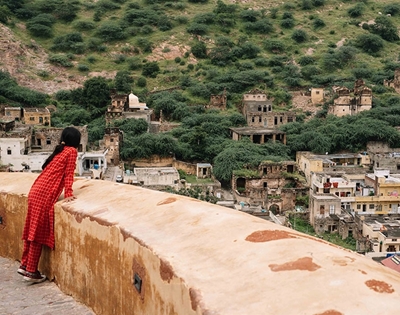 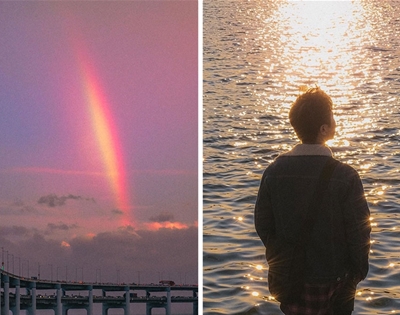 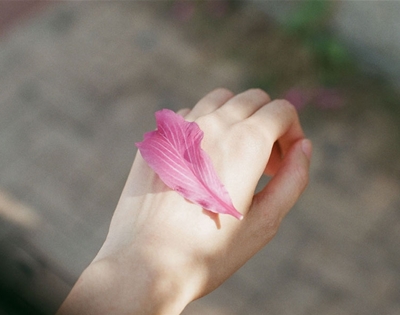 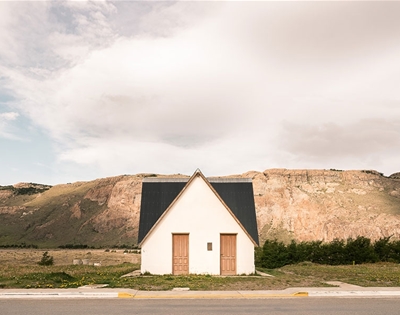 the houses of patagonia 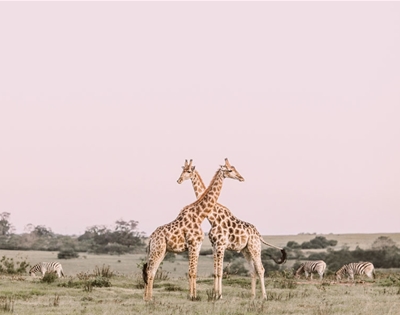 call of the wild 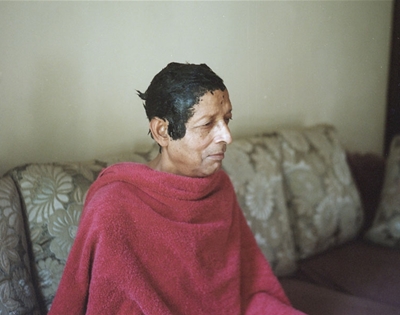 show your work: anu kumar on her favourite snaps