a little bit crafty: the sock-a-saurus

Turn your tiny pup into a ferocious dino dog with this super-cute sock project.

To celebrate our first craft book, A Little Bit Crafty, being back in stores, we wanted to give you a peep at one of the projects you'll find inside its pages. Turn your tiny pup into a ferocious dino dog with this super-cute sock DIY. 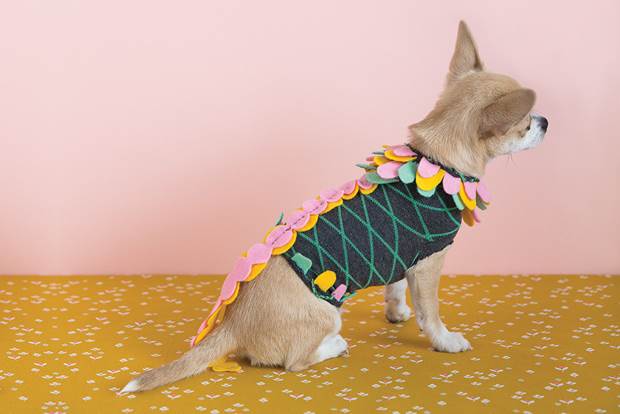 1. Start by snipping off the sock toe in a straight line and cut off any tight elastic at the top of the sock.

2. Fold the heel of the sock over so it forms a little half-circle flap. Now make a 3cm snip in the middle of the semi-circle’s flat bottom, making sure to cut through all layers. Unfold and neaten up these leg holes, making them a little larger if necessary.

3. If you’re worried that the sock will fray, blanket stitch around the two leg holes, allowing for a little bit of stretch in the fabric.

4. Set the sock aside and lay the felt out flat. Decide what shape the scales will be – a close-ended ‘U’, triangles or squares, each about 1cm wide, all work well. Cut 10-15 scales in each colour.

5. To make the tail scales, cut a 4cm-wide strip down the length of two of the pieces of felt. Fold each one in half lengthwise and roughly draw repeated joined half-circles on it in a line. Slowly make each half-circle smaller as you taper towards the tip of the tail. With the felt still folded, cut along the drawn line (leaving at least a 3mm gap at the fold so the felt stays in one piece).

6. Now you’re ready to sew the scales around the neck. This must be done one at a time so the sock stays stretchy enough to comfortably fit over the dog’s head. Most socks will curl up along the raw edge once cut (if not, just fold the edge of the fabric over). Tuck a scale, flat side up, under the folded edge and carefully stitch it on. Repeat this step until the scales go all the way around.

7. Sew a second set of scales around the opening, about 3-5mm down from the first row. The idea is to make them overlap, so the first row covers the stitches, but the new scales still peek out from underneath. Repeat this as many times as you like – the costume here has three rows of neck scales.

8. Now sew one row of scales around the bottom opening of the sock.

9. All you need to do now is add the dino tail. Lie the sock upside down so the leg holes are on the bottom. Put the felt tails down the centre of the sock, then sew down through the fold line of the felt tails and the sock. Make sure the tapered end of felt is hanging over the end of the sock to make a convincing tail. 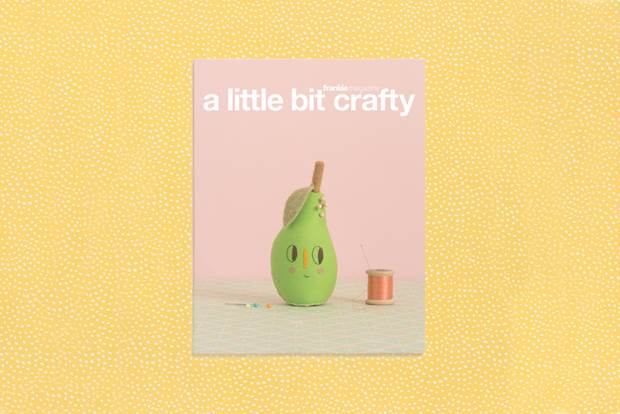 Find this, and 38 other easy-peasy projects in frankie's very first craft book, A Little Bit Crafty. Have a hunt for your nearest stockist, or you could nab a copy online.

----
Colleen Pugh says her greatest claim to fame is that she once embarrassed Ryan Gosling with a tea towel she designed. She is clever with words and likes to make things. dearcolleen.co

how to crochet a sunflower bag