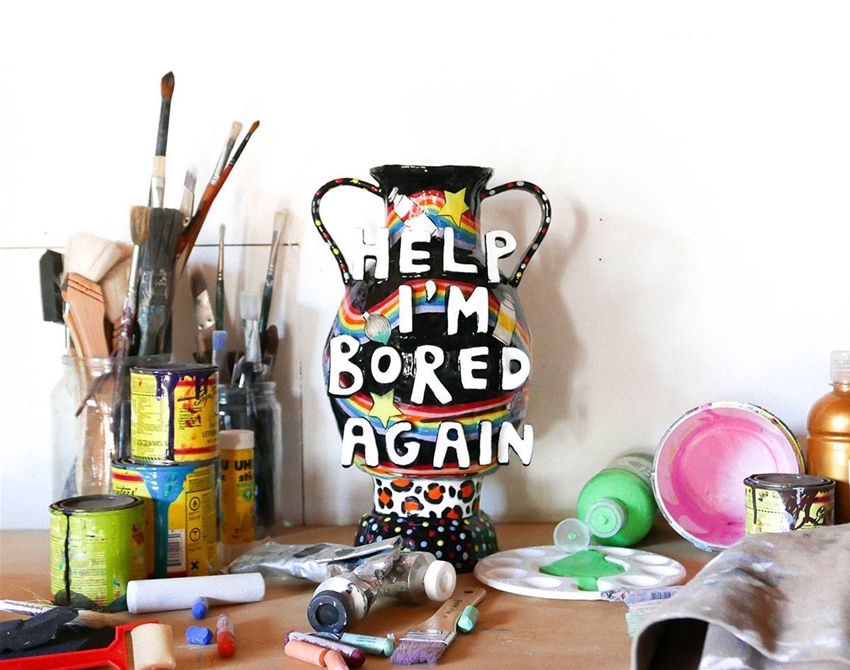 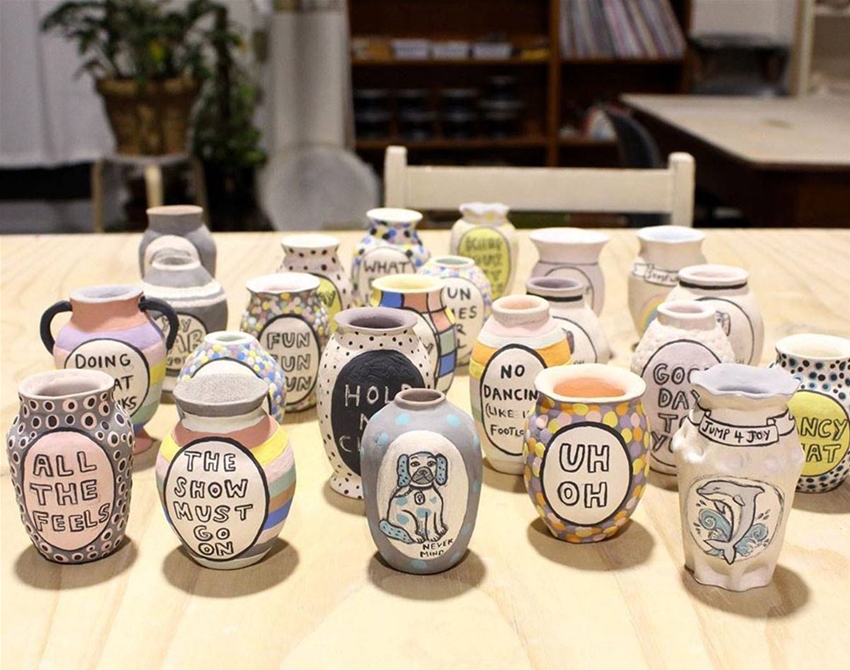 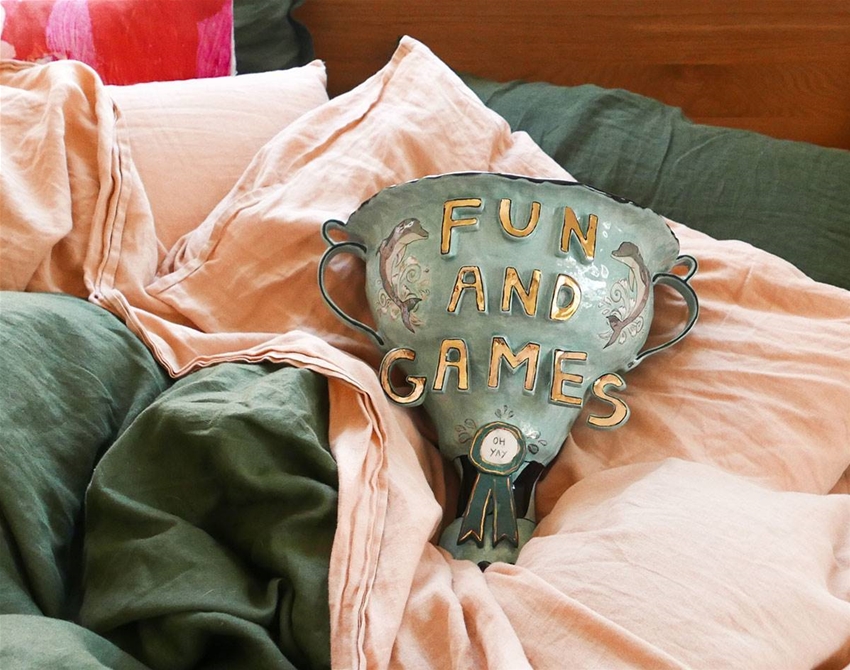 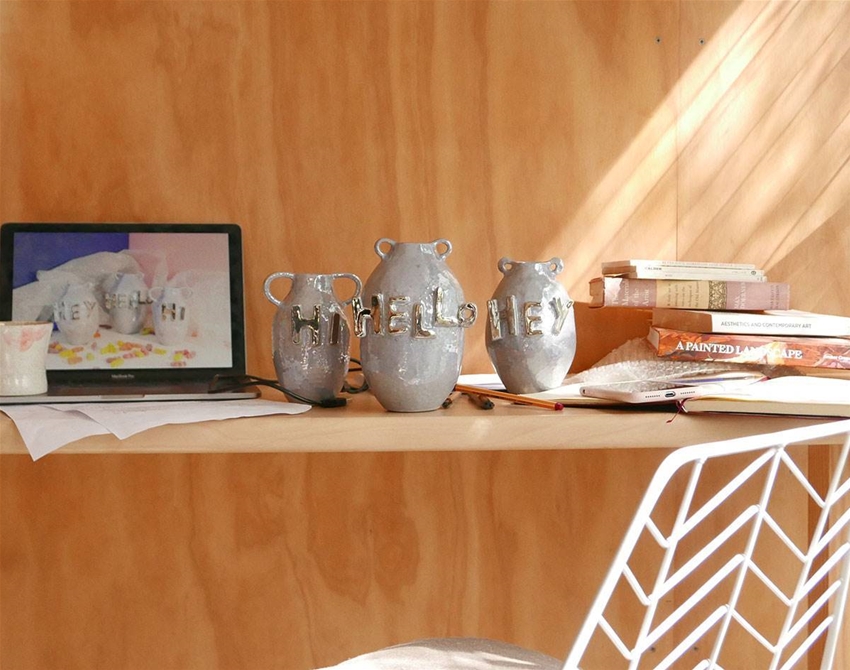 When Queensland ceramicist Bonnie Hislop revealed some super-sassy vases on Instagram earlier this year, we were struck by how the pieces perfectly encapsulated our thoughts during iso. Since then, Bonnie’s been hard at work creating a whole bunch of straight-talking clay vessels, which you’ll be able to view online from this weekend through The Third Quarter gallery. In addition to her brightly coloured vases, Better Luck Next Year also features a video performance involving cereal, musk sticks and a shattered trophy. We caught up with the Bonnie to hear what it's all about.

What prompted you to start making the pieces for your show? I started making typographical vases at the start of lockdown in April in response to emotions running high. I started creating as a way of highlighting the collective frustrations, anxieties and feeling of tenderness being expressed across social media, and I was thinking about how this strange time would be remembered and documented in years to come, particularly in an archaeological sense. I was inspired by Greek pottery forms, imagining that in 500 years a fragment of an Amphora vessel might be uncovered at the same time as one of my vases, and both of these would give insight into life at each point in time.

The pieces I made scream their messages loud and clear, leaving very little to the imagination or interpretation. They’re essentially our inner monologues during this time – we’re tired, overwhelmed, but trying to keep it together as best we can (with a sense of humour, too).


How did you feel after channelling these emotions into clay? It’s been quite a cathartic process. These pieces feel very true to my own performative nature as a person and I was very interested in them being used as communication tools through sharing on Instagram. I hope they sum up people’s feelings when finding the words to describe these experiences is overwhelming. I hope people feel like their thoughts are being heard, and that it gives them a bit of a giggle while they’re coping with these weird times.

Did you experiment with new techniques while making these? This is the first time I’ve worked with such complex forms of this scale. The larger vases/trophies are around 40cm tall. I wanted a dramatic effect, with either exaggerated or impractically small handles, or a narrow foot supporting a large form. I observed Greek pottery shapes when approaching each piece, as well as trophies and rosettes – I began to see these pieces as consolation prizes for a year where we’ve all been thrown off our game.

One part of the exhibition involves a performance where you smash a vase. What does the act of destroying your work mean to you? One of the most important parts of my practice is maintaining mindfulness and respect for clay as a finite resource, so I try to only fire pieces that are resolved and structurally sound. Ceramics are quite a romantic art form – a piece can fail at any part of the process, but also has the potential to last thousands of years.

The piece in this performance was showing the signs of strain before it had dried or been fired. Having already spent many hours on it, I still decided to decorate it and give it an elaborate send-off. The phrase ‘Doing Great Thanks (help)’ paired with the act of pushing it off a table, reflects the small talk we have on a daily basis. The pandemic has deepened these conversations by eliminating the expectation that we must appear to be keeping it together. This is what this performance is for me: breaking down the formalities and the need to answer “How are you?” with the stock standard “I’m well/good/doing great, thanks”, because we’re all experiencing a significant disruption to our lives.

This year has obviously been a bit shit. What are a few things that have made you smile? I've really enjoyed deep conversations with friends, taking things a little slower and trying to be softer as a human.

Better Luck Next Year runs from October 9 – 23 and is presented by The Third Quarter. get down to melbourne’s blak makers' market