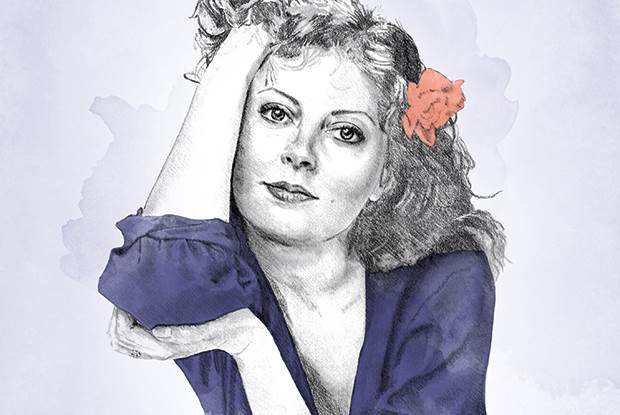 BULL DURHAM (1988) During the late 1980s and early 1990s, America’s love affair with baseball spawned a whole bunch of fantastic films: Field of Dreams, Major League, A League of Their Own, The Sandlot. You can also put Bull Durham on the list – it’s maybe one of the best-ever films made about any sport. It’s funny, romantic, buoying and nice. One of the reasons it’s so great is because of Susan Sarandon, who plays Annie, a sometime English teacher who worships full-time at the Church of Baseball. Each season, Annie renews her devotion to the game by choosing a hotshot new ballplayer to be her boyfriend. As she explains: “Despite my rejection of most Judeo-Christian ethics, I am, within the framework of the baseball season, monogamous.” Sports can bring meaning to our lives in ways we never imagined, my friends. This is the one where Susan Sarandon… teaches us how to wiggle those hips and hit a home run.

THE ROCKY HORROR PICTURE SHOW (1975) It’s hard to know what Janet Weiss (our girl Susan Sarandon) sees in Brad Majors, her extremely boring and conventionally handsome fiancé. But, then again, at the very beginning of The Rocky Horror Picture Show, Brad and Janet are made for each other: they’re both as straight-laced, uptight and dull as they come. By the end of Rocky Horror, though, both Brad and Janet have transformed. In the space of a single night, Janet is seduced by Frank-N-Furter (the Sweet Transvestite from Transexual Transylvania); the seducer of Rocky (a Frankenstein-like creature, only more beautiful and muscly); turned to stone and re-animated in corsetry; and informed that Frank is actually an alien and his gothic castle is a spaceship. It’s quite the turnaround. (I’m really sorry if this doesn’t make sense, but Rocky Horror is famously nonsensical and this is the best I could do.) This is the one where Susan Sarandon… sings.

LITTLE WOMEN (1994) Of all the film versions of iconic American books, Gillian Armstrong’s Little Women might be one of the very, very best. The fact that Gillian Armstrong is also a fair dinkum Australian person makes this accomplishment even radder. As The New York Times put it: Little Women sets the gold standard for American girlhood. The March sisters – Jo (Winona Ryder), Meg (Trini Alvarado), Amy (Kirsten Dunst) and Beth (Claire Danes) – and their mum (Susan Sarandon) live in the splendid and snowy Concord, Massachusetts, during the American Civil War. Supplies are scarce, but the March girls are resourceful, and the film is at its loveliest when it just lets us spend time with the family and witness the great love and affection they share. This is the one where Susan Sarandon… plays the best mum, who you sort of wish was also your mum.

DEAD MAN WALKING (1995) Do you need cheering up? Don’t watch Dead Man Walking, then. It’s an agonising and emotionally devastating drama about capital punishment, and asks some pretty heavy questions, like, when does another person ‘deserve’ to die? And, are some human beings undeserving of compassion? In the film, Susan Sarandon plays Sister Helen Prejean, a nun from Louisiana who establishes a relationship with a condemned man, Matthew Poncelet (Sean Penn), who is accused of abducting and murdering two teenage sweethearts from their car in the woods. Matthew is unrepentant and insists he isn’t responsible for what happened – he was there, he says, but his partner Vitello committed the murders. The film follows Sister Helen and her interactions with Poncelet, as she tries to come to terms with the worst of human brutality while maintaining her faith in the possibility of a fragile personal goodness. So, all up, pretty light viewing. This is the one where Susan Sarandon… plays a nun.

THE BANGER SISTERS (2002) I’m sure The Banger Sisters was a blast to make. There’s something about a film centred on old friends who reconnect and rediscover their relationship that makes for very enjoyable viewing. The story goes like this: Vinnie (Susan Sarandon) and Suzette (Goldie Hawn) used to have a wild time together in the ’70s, when they were groupies who followed rock bands and… umm… ‘banged’ them. But while Suzette never let go of her youthful sense of freedom, Vinnie – now Lavinia Kingsley – ended up moving to the ’burbs, where she had a couple of kids, married a perfectly-nice-but-very-dull man, and embraced routine, convention and beige. The women haven’t seen each other for decades, but when Suzette loses her job, she decides to find her old pal and get her to dust off her animal print spandex one more time. Expect bad wigs; Sarandon’s real-life daughter, Eva Amurri; and Polaroid dick pics. This is the one where Susan Sarandon… awakens the groupie in all of us.

THE CLIENT (1994) Truly, John Grisham books and their movie adaptations were a THING in the 1990s. Between 1993 and 1998, the universe gifted us more than one John Grisham adaptation a year. The Client was the third of these, and uses a familiar Grisham-y formula: a melodramatic event (right before a mob lawyer kills himself, he tells a little boy where the body of a dead United States senator is buried, because why not) sets in motion a string of events involving lawyers and a conspiracy. One of these lawyers is Reggie Love (Susan Sarandon), who tries to protect the 11-year-old Mark (Brad Renfro) and his little brother from both the big, bad mobsters and the steely-eyed Tommy Lee Jones. As you can tell, The Client is basically the movie equivalent of an airport novel, and it’s kind of fantastic. This is the one where Susan Sarandon… plays a charismatic, tough-talking lawyer.

THELMA & LOUISE (1991) Have you ever had one of those nights out with your lady friends where everything seems to be going OK-ish, but then someone ends up dead? Me neither. We are clearly not friends with Thelma (Geena Davis) or Louise (Susan Sarandon), which is a GREAT SHAME, despite the occasional bursts of gunfire. Thelma & Louise is a road movie like no other – after shooting a would-be rapist dead, Louise (the gunslinger) and Thelma (her buddy) go on the run into the American south-west, which is full of sleazy truckers, sneaky thieves and lots of cops. When two friends become partners in crime, there’s not much you can do other than put the top down, spin the wheels and head for the horizon. (All while wearing some pretty banging duds.) This is the one where Susan Sarandon… shoots a man dead, but you feel surprisingly OK-verging-on-good about it and then you worry what this says about your morals.

This ripper story first appeared in the pages of frankie issue 79.

hear from business-savvy creatives at this ace online symposium