Escaping the city to sleep out under the stars? Allow us to provide you with a few handy camping tips and tricks – including how to whip up a DIY stove.

PORTABLE WASHING MACHINE Camping is dirty business, especially when you can’t easily throw a grubby t-shirt and shorts in the wash. Avoid slipping into grime-covered duds each day by constructing a DIY washing machine contraption – all you’ll need is a big-arse bucket with a lid; something drill-like to make some holes; and a (brand new) toilet plunger. Simply create a hole in the middle of the bucket lid that’s large enough to squeeze the plunger’s handle through, then poke a few more holes in the plunger itself for some extra agitation. Whack your clothes in and fill the bucket halfway with soap and water; close the lid nice and tight; and pump the plunger up and down for several minutes. Voilà – you’ll smell fresh as a daisy. (Almost.)

MAKE-IT-YOURSELF CAMP STOVE If chucking a hunk of meat straight onto a campfire isn’t your thing, you could build a makeshift grill for only a few bucks. Take a wire cooling rack and a deep foil baking pan – the kind you might use for carting around a homemade lasagne – then pop the first on the second with some charcoal in the gap. Light the charcoal and whack your dinner on the rack. It’ll be just like a home-cooked barbecue meal, only with more stars overhead and MacGyver-like problem-solving flair. (Worth noting: you’ll probably need some extra kindling to get your flames burning bright. Stray corn chips will do the trick, as will leftover lint from your clothes dryer – just stuff it into a cardboard toilet paper roll for a homemade fire starter.)

OUTDOOR STORAGE SOLUTIONS Campsites tend to descend into chaos fairly quickly – a lone thong here; some forks over there; a packet of matches sitting out in the rain. It’s not too hard to keep things organised, though, if you’d prefer to have your bits and bobs at arm’s reach. Invest in one of those wardrobe shoe organisers – the hanging type that has a bunch of pockets to slide your footwear into – and use it as a handy supply cupboard instead. (Excellent for things like cutlery, washing up liquid, and first-aid provisions.) TicTac containers make great spice holders, too, as do seven-day pillboxes. When in doubt, turn to good ol’ Tupperware for keeping supplies dry and in one place – especially round plastic tubs to protect toilet paper from the elements.

DIY LANTERN Can’t find where you dropped your marshmallows in the bush? Need some light in your tent to play cards into the night? Good news: you can put together a surprisingly effective makeshift lantern with just a smallish torch and large-ish bottle of H20. The instructions are pretty dang easy: take a clear plastic bottle, like the ones that hold soft drink or milk; fill it to the brim with water; seal it with the lid; shine your torch through the side. (Even better if you have one of those strap-on head lamps handy – it can be secured to the bottle for ease of moving around.) The water will start to glow like a lava lamp minus the psychedelic goo, making nocturnal goings-on a whole lot easier on your eyes. 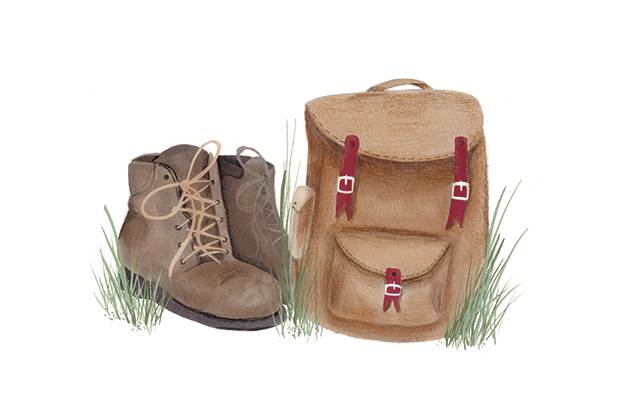