my job: hannah lewis dissects dead bodies for a living

“Occasionally, I talk to the bodies. It’s difficult not to, especially when I first receive them, because they look like someone’s grandmother or grandfather.”

We’ve teamed up with the folks at UNiDays to bring you stories about studying. Did you know UNiDAYS members can nab a 25 per cent discount on their frankie magazine subscriptions? Well, now you do. Check the bottom of the story for more deets.

Here at frankie we love chatting to folks about their jobs. In issue 82, we spoke to Hannah Lewis, an anatomical services specialist in Canberra. 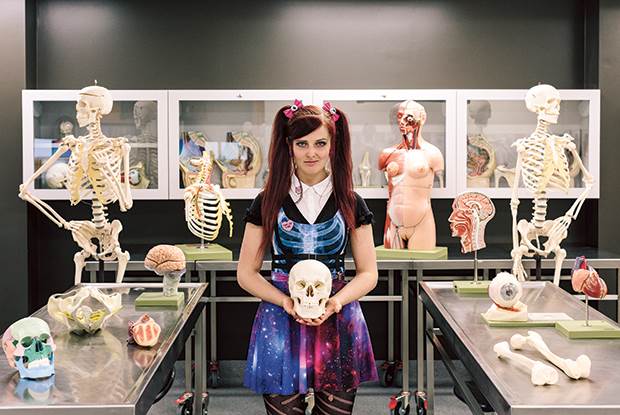 As told to Mia Timpano. Pretty pic by Anthea and Lyndon Torres.

My interest in dissecting dead bodies started when I was sitting in a year 11 ancient history class. We learnt about a physical anthropologist who’d been studying the human remains at Mount Vesuvius. She deduced that one particular young female had been a slave because the bicipital groove in her humerus was well worn, indicating that that muscle had been used a lot. I thought that was just so cool. At uni, I majored in anatomy, and a dissection program came up. I volunteered to join it, and from that moment I was hooked.

Initially, I was hesitant to touch the specimens because they don’t really smell like dead bodies. They smell more like a cocktail of chemicals. And of course, being around anything dead is confronting, but a deceased human is next level. I was in awe, though. I remember sitting there dissecting a body and I could tell it was female because she was wearing pink nail polish. I was like, “Ooh, jeez – that’s a human.” I volunteered for a year-and-a-half with that lab. From there, I did a dissection competition and won a prize. I completely blew myself away; I didn’t know I could actually do something like that. Then I applied for the role of anatomical services specialist at the Australian National University in Canberra and, by some miracle, I got it.

The facility here is quite small, so they can only afford to have one person in the role, which is me. I manage the lab and do all the maintenance, but my larger role is taking care of the bodies themselves. All the bodies are used for medical teaching and research. I’m involved from the moment they’re delivered from the funeral company. I give them a wash; de-identify them by shaving their hair; embalm them; and then store them in the fridge for six months – that’s how long it takes for the embalming process to finish. Then, I section them and dissect them out.

Occasionally, I talk to the bodies. It’s difficult not to, especially when I first receive them, because they look like someone’s grandmother or grandfather. I’ll say, “Excuse me, sir. Do you mind if I lift this?” or, “Mind your head there – sorry.” I really wish I knew what type of music they liked, because I’d love to play that while I embalm them, but I think that’s too personal a question to ask the families. I don’t want to hurt anyone’s feelings.

For a long time, men dominated this industry. But my supervisor is female, and her supervisor is female, and the dean of the medical school is female. We’re extremely lucky to be in an all-female laboratory in a medical school. It’s difficult being a woman in this line of work, because sometimes people don’t respect you. You really have to stand up for yourself and say, “No, I’m the person you’re supposed to be talking to. I run this lab.” Sometimes they do a double-take and are like, “But you’re wearing pigtails and you have eyeball hair bows and you’re wearing a skirt. How can you possibly do this job?” I’m like, “I do this job. This is my role.”

Working alone a lot of the time can be extremely lonely and frustrating. Honestly, music is how I get through it. I have these awesome noise-cancelling headphones. Also, in the demonstrating room, we have a screen you can play YouTube on, so when there are no students in here and we don’t have anyone on the table, the lab turns into a little dance party. When there’s someone on the table, the music’s a little bit more subdued. I don’t see the point in the lab being a dreary environment – it should be a celebration of life.

This interview first appeared in the pages of frankie issue 82. Thanks to the kind types at UNiDAYS, uni students can nab 25 per cent off their frankie subscriptions. Just click here, then register or log in using your UNiDAYS member details. Easy as!

why do we love true crime so much?

where are they now? a chat with former good stuff winners bad behavior