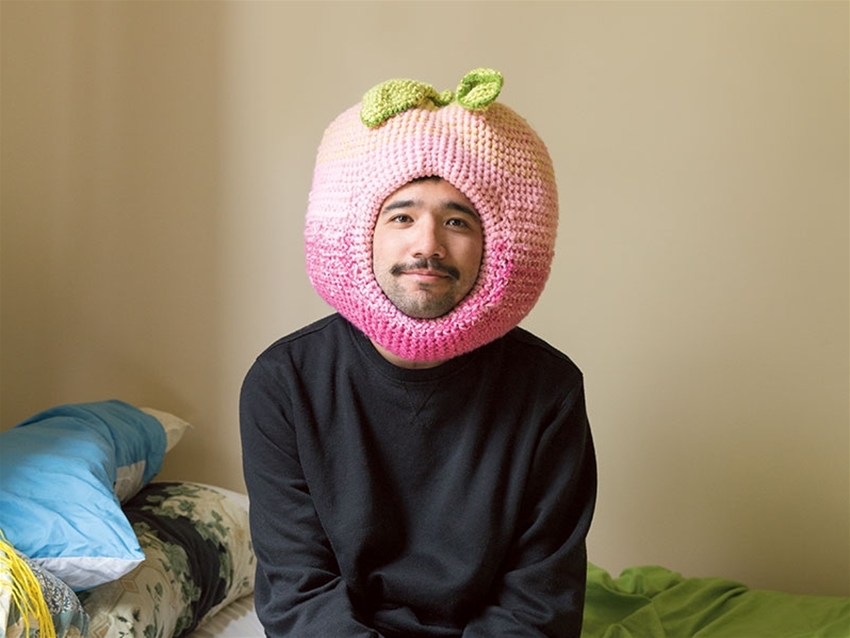 look what we made – phil ferguson aka chiliphilly

Phil Ferguson crafts his social media persona in cheap yarn and crochet stitches. The result is a kind of performance art in 2D – and a lot of fabulous hats.

The following chinwag comes from a little coffee table book called Look What We Made. It's a compilation of inspiring chats we had with local makers of all sorts, including the wonderful Phil Ferguson who you see here. If it tickles your fancy, pick one up over at the frankie shop. 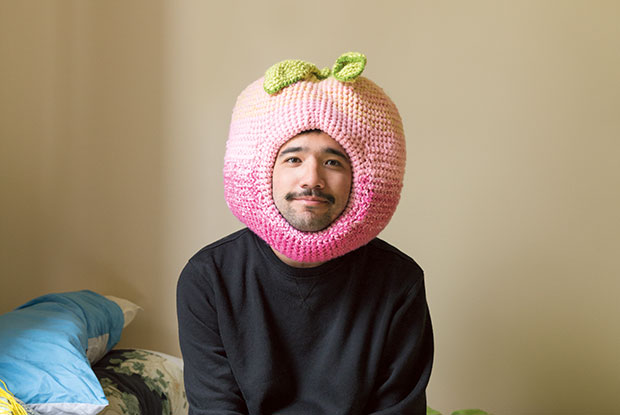 You might have already seen Phil Ferguson, aka ChiliPhilly, online. The face, impassive, almost sad, surrounded by an architecturally impossible mound of coloured yarn in the form of a hamburger, or a pizza, or a popsicle, or a meat pie, or a strawberry. Basically big, colourful and edible. Think Carmen Miranda, but in crochet form.

Phil started making his headpieces back in August 2014. Within a few months he’d been featured on the BBC, Huffington Post, BuzzFeed and a tonne of other media outlets. These days, he has almost 140,000 followers on Instagram and before you ask, no, his hats aren’t for sale. “I’ve never been interested in other people owning my work,” Phil says. “That’s not what they’re for. From the beginning, this was about creating a persona, something I was known for. If I start selling them, I lose control of that.” He shrugs. “It’s just one of those things.” 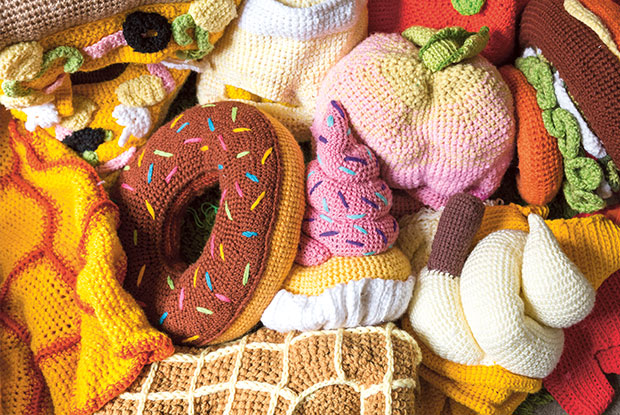 Phil works out of his bedroom in Coburg in Melbourne’s north, a raucous mess of half-done outfits, loose threads and balls of yarn the size of your torso. (“I buy them all from the $2 shop,” he confesses.) Watching Phil crochet is like seeing a master at work. His hook dances with such speed and ease that the garment seems to hover suspended in mid-air, slowly but measurably becoming bigger before your eyes. These days, it only takes him around six hours to stitch a new headpiece from scratch. “I don’t sketch, or draw a plan, or anything like that. I just make them. I have this inbuilt feeling for the number of loops and rows I’ll need. The maths works out in my head.”

Phil turned to crochet after making the move from Perth to Melbourne in early 2014, at the age of 21. “When I first moved to Melbourne I was coming out of art school and looking for a new project. I already had in mind that I was going  to make an Instagram account and photograph myself wearing these crocheted hats. The food part was just an accident.” Initially, he framed it as a quest to make new friends in an unfamiliar city. “Whenever people interview me they  always ask, ‘Did you end up making friends?’” He laughs. “And I’m like, ‘Well, how else would  I make friends?’ It’s what my generation does.” 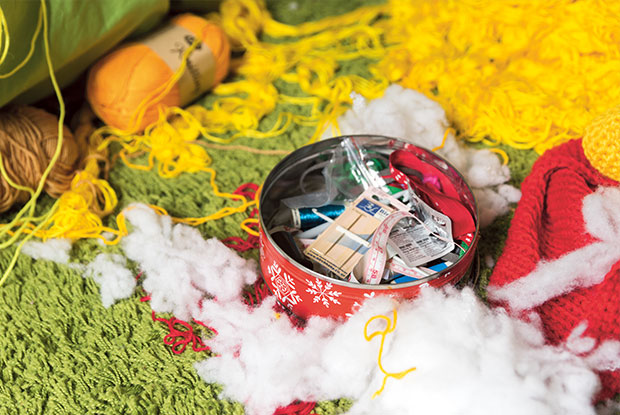 His first piece, a comparatively basic rainbow cowl, took more than three months of brutal trial and error to complete: “I just had no idea what I was doing.” But once the formula was set, the iterations became extravagant, fast. Phil’s third piece was a full hamburger stack, with tomato, cheese, beef, lettuce and pickles, created in honour of the burger shop he was working at to pay the bills. Every other waking moment he dedicated to crochet. “I set myself the challenge that each week I needed to release a new image. I really committed to it. It almost killed me, but it’s how I developed my skills into what they are now.”

It’s this focus on the image that sets Phil apart from a lot of his peers. For him, the finished product isn’t the hat itself, it’s the final photo or video that ends up on Instagram. “I don’t really care what state the piece is in, or whether it’s functional. People only see an image, so that’s all that matters to me. They’re essentially props for an image or a video – the continuation of the ChiliPhilly character.” 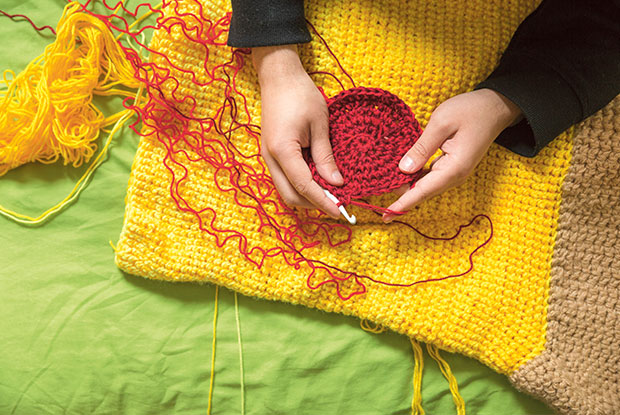 Having done the legwork to build his profile, the challenge now is to parlay this into a feasible revenue stream. “It all happened so fast early on that I didn’t have time to work out what to do with all the notoriety. It’s only been over the past year or so that I’ve started working out how to make the whole project sustainable.” For Phil, this means crochet workshops, paid appearances and occasional commissions as a social media influencer.

In early 2017 he staged an exhibition of his headpieces at the Australian Design Centre  in Sydney. “In a lot of ways that was a real full stop on the first phase of my work,” he explains. “Now I’m focussing on making full food outfits. You have to keep moving to keep people interested.” 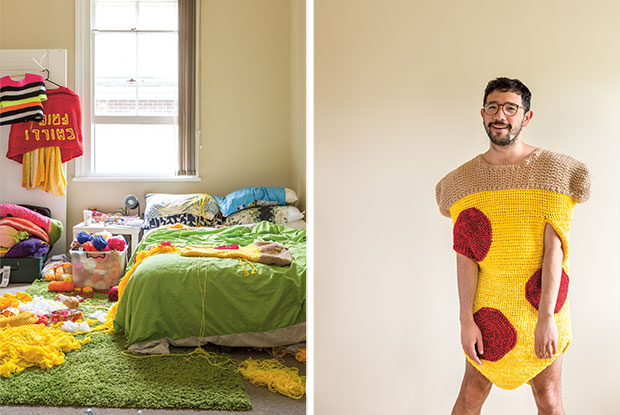 But full ensembles may also be a stepping stone to another of his long-term goals: performing. “Drag has been one of the major inspirations for this since the very start,” he says. “I really got into RuPaul’s Drag Race a few years ago and it showed me how rich these drag personas could be. It started me thinking about what I’d wear if I was up there myself.” But Phil’s in no rush to get on stage quite yet. “It’s the goal eventually, but I want to make sure that when I do it, I do it well. I’m not stressed about doing small bits on the way up, because I know that there will be enough traction behind me the moment I start. It will happen.”

As for his crocheting future, Phil says he’d love to do something huge and ridiculous, like stitch an entire room, furniture and all. “I hope one day somebody will say, ‘Can you crochet a big thing?’ I’ll be like, ‘OK, give me 30 grand. I will turn this room into anything you want!’ Surely somebody out there would be keen.”

Keen for more artistic inspo? There's pages and pages of it in Look What We Made, which you pick up over at the frankie shop. 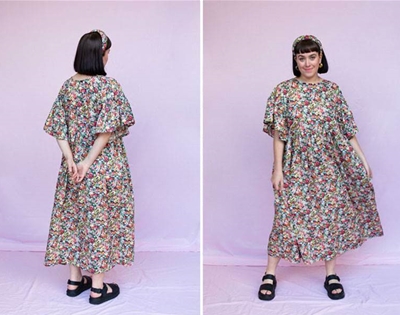 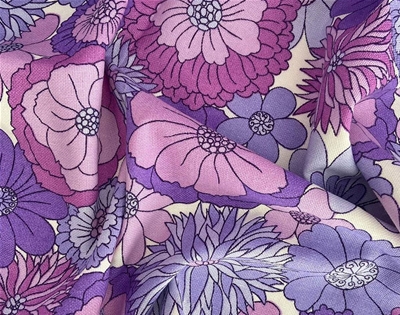 where to buy vintage fabric and other crafty bits 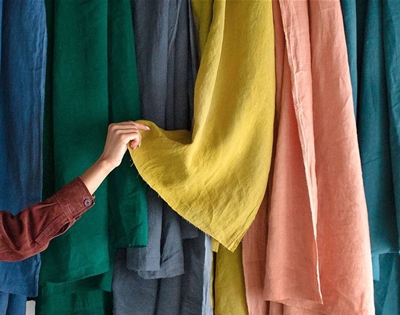 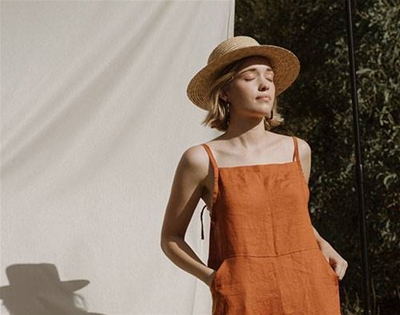 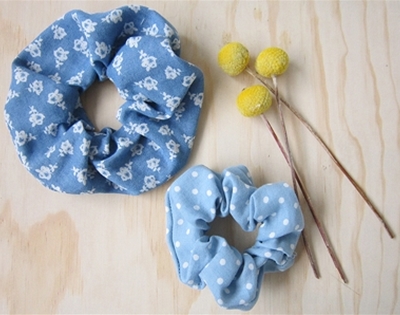