five films to watch when you're nursing a hangover

When the time comes to recover from a late night, it helps to have a plan.

I am going to be honest here: I have been hungover maybe five times in my life and I have regretted every single one of those times. I like to drink tiny bits of booze before merrily going to bed, because my number one hobbies are basically sleeping, lying down and not vomiting.

I know, I know: I have been told many times that I am “no fun”. For me, though, there are few things less fun than the sickness, the slowness and the general quivering regret that comes with the hangover. SORRY (but not really).

When the time comes to recover from a late night, it helps to have a plan. Make sure you have water and salty foods. Ensure there is a steady supply of Panadol on hand. I’d also recommend watching a movie or two to ease you through your recovery, which is where these five gems might come in handy: 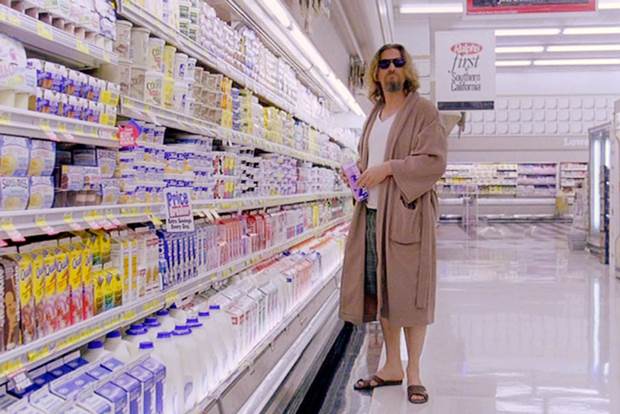 There are many things about The Big Lebowski that endear it to a sore head, but mostly it’s got an ideal tempo and attitude for a hungover day or evening: everything is slow, everything is taken in its stride, but everything is still funny and interesting, and – importantly – not very demanding or requiring of any special or intense concentration. Lebowski also features the consumption of alcohol and other intoxicating substances, but at a sedate and moderate pace, which might get you back into the spirit (if you feel like it), while still punishing you for whatever excesses you indulged in the night before. “Two oat sodas please, Garry.” Don’t mind if I do.

This 1964 science fiction epic has a deserved reputation as a Very Serious Movie, made by a Very Intelligent Man about Very Great Themes – and also it is very long. These are all good things. One thing that can really work in a film’s favour if you’re hungover is its duration. After all, what’s especially bad about hangovers, whether mild or severe, is how long they tend to stick around. So, you’ll need to find something to stare at for as long as possible without adding to the existing burdens of being awake and alive. One thing that can be said without doubt about 2001: A Space Odyssey is that it is one of the most visually and sonically stunning films ever made, but it mercifully never assaults you, even at its most intense – it is suitably like floating down a deeply strange length of river, each bend and reach bringing a newly fascinating vista that soothes, even as it slightly disturbs. It also features great sequences set in the vacuum of space set in complete silence – all there is to do is gaze. Perfect.

I have never taken a vow of silence, but sometimes I wish that more people would (is that mean? Probably. But it’s true). This is especially the case when I do not really feel like facing the world, because the world is noisy and confronting and my head hurts and what even happened last night, my goodness. Into Great Silence will fix that. Into Great Silence is a documentary about the rhythms of life at a Carthusian Monastery in the French Alps, whose inhabitants are strongly committed to lives of solitude and silence. There is not a single word of dialogue spoken throughout the film: just the sounds of soft padding footsteps, doors closing and the occasional chanting. The monks’ lives are untroubled by many of the demands of modern life and, honestly, it looks like the best thing in the world.

I cannot remember much about Bright Star other than its beauty, its loveliness and its quiet, unhurried way of capturing time and love on film. All of these qualities can be soothing when the world is a throbbing, chundering blur of regret. The film tells the story of the poet John Keats (Ben Whishaw) and his love for Fanny Brawne (Abbie Cornish), during the tubercular nineteenth century (let me warn you now: things do not end well). This is a film all about mood and romance and patience. It is about wildflowers and poetry and lush green fields. It is just wonderful to watch.

Sometimes in life only trashy movies will heal the pain. Sometimes in life that trashy movie is Anaconda. Look, Anaconda is dumb. It is so dumb. I can’t even begin to tell you all the ways in which it is dumb, but let me try: 1. Firstly, I’m sure the director (Luis Llosa) thought he was telling a kind of Moby Dick-type tale about a man obsessed, but he’s really just telling a story about Jon Voight, who has a ponytail and is hung-up on a giant snake; 2. The good news is that when Jon Voight finally gets what is coming to him (i.e. spoiler: the snake eats him), there is a point-of-view shot from inside the snake; 3. Jennifer Lopez is in it. Pre-On the Six Jennifer Lopez; 4. Ice Cube is in it. Post-NWA Ice Cube. (It is all deeply confusing.) 5. The following dialogue is uttered: “This river can kill you in a thousand ways,” so, as you can tell, it is an extremely deep and meaningful film. What Anaconda can offer you, though, is FUN and SILLINESS and MINDLESS ENTERTAINMENT, which is sometimes what you feel like, you know? It’s really the best.