five films to get you off social media

If you need to take a break from social media yelling, why not leave your phone in the other room and give these flicks a go?

Maybe my favourite news story of 2014 was the one about sharks attacking the internet. I really think this proves that sharks have our best interests at heart: despite their unfriendly reputations, sharks know, instinctively, that we should all just get off the damn internet already.

If you knew me in real life, you’d know that I have very bad feelings about the internet – that cursed and bewitching thing. This is because despite all my very bad feelings, I also cannot stop using the internet. It’s a conundrum and I’m a hypocrite, and I still too frequently find myself falling into the endless depths of the digital sea, only to emerge 10, 20, however many minutes later, wondering where all the time went.

It can be hard to stop using the internet when so many digital services and technologies are designed to exploit human weaknesses – our basic desire to be distracted, our natural curiosity about things, our desire to protect ourselves from danger by watching, monitoring, checking. What I’m saying is: I wish sharks would attack the internet more often. I think we all need a break.

So, if you ever need convincing to take a break from social media yelling, Wikipedia diving, YouTube watching, endless Netflix browsing, or anything where you’re repetitively and obsessively churning over the same old garbage, why not leave your phone in the other room, unplug your modem, and watch the following five movies? 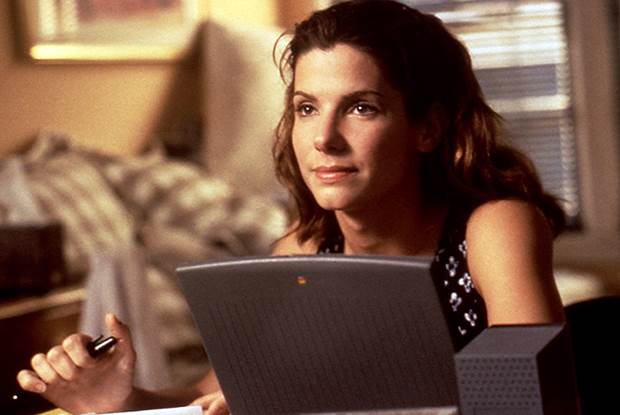 What does it mean to connect with another person? In David Fincher’s extremely good The Social Network, human and social bonds are moved online through algorithms and datasets dreamed up by Mark Zuckerberg (Jesse Eisenberg), a man-child who is aggressively hopeless at understanding other people. If you’re ever wondering how we all got into this mess, The Social Network is a good place to start.

Ah, the 1990s. So many amazingly terrible movies about cyberspace and computers (see, for example, Hackers, Disclosure, Ghost in the Machine, Johnny Mnemonic, Lawnmower Man). As melodramatic and silly as The Net is, it does raise some pretty legitimate questions about the frailty of human identity when it depends on databases and technologies that can be very easily corrupted. If you’ve ever wanted to see Sandra Bullock get betrayed by the internet, well, The Net is really going to set your world on fire.

I’m not sure if there’s a better movie about automation destroying human life than Terminator 2: Judgment Day. Most of the film is set the years immediately before a nuclear war started by Skynet, a computer system created by the US military that develops self-awareness. When puny humans aren’t being assailed by an omniscient bloodthirsty cloud computer, they’re being hunted down in the past by a time-travelling cyborg hell-bent on destroying the future. It’s all very grim. Don’t trust STEM, kids.

Catfish is white-hot contender for one of the weirdest documentaries recently made (“ever made” feels a bit over the top, but also maybe that). The doco focuses on the endless shape-shifting people can do online – and how easy it is to impersonate a perfect stranger on social media. To make matters weirder, the film was also accused of being a hoax (it has since been independently verified). Anyway, if you want to watch a story about a weird online romance that isn’t all what it seems… Catfish!

Do you know where there are no smartphones or internet connections? UNDER THE SEA, BABY (yes, there are internet cables that sharks like to bite, but we’ve already been over that). If Finding Nemo is a blissful wonderland, it isn’t just because of the ocean’s lack of web servers – it’s also because of the heartfelt moments shared between Marlin the clownfish and Dory the blue tang as they go on their journey together. Marlin and Dory are an odd couple, sure, but they also forge a friendship that brings out the best in each other. It’s a nice reminder of what happens when you spend time with actual people in the world… or under the sea.