Ahead of their first-ever Australian tour (which frankie is presenting, huzzah!), we interview Kings Of Convenience's Eirik Glambek Bøe about architectural psychology, Marco Polo and straight up music.

Kings Of Convenience - the Norwegian rulers of all things well-written, acoustic and harmonious - are touring Australia over the next fortnigh for the first time ever.

Despite releasing three albums and touring around the world's northern regions for over a decade, they have never managed to make the leap across to our shores. That is, until now. And what's even more incredible is that they've let us present their tour! Oh, what Scandinavian darlings they are.

We interviewed one half of their balanced duo, Eirik Glambek Bøe, and had a chat about architectural psychology, Marco Polo and straight up music. 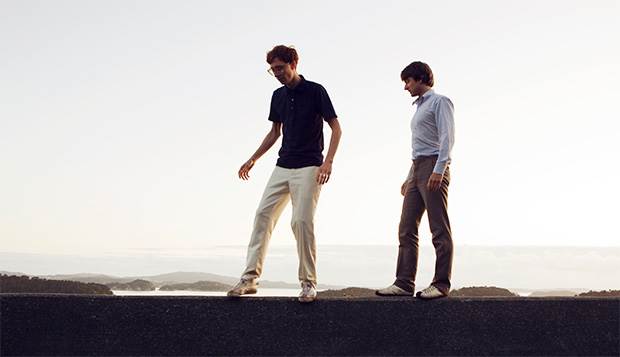 Hey there Eirik! You grew up in Bergen, Norway. How do you think life there affected the way you write music?
In many ways, or in all possible ways, I guess. The environment I grew up in brought me all the reference points I now have. There are no beaches and no golf courses in Bergen, so there were only two options given: football or music. I wouldn't have been considering music if there weren't people around me who I admired that were either playing music themselves or encouraging me to play.

When and where do you feel the most creative?
Creativity is something that occurs when there is a need for it. That usually means it probably won't occur when you are in a situation when you really want it to happen! For me it happens when I'm either in a situation where I feel a loss of control, or when I'm discovering something I thought I knew, but is in fact different from what I thought.

What advantages are there creatively with you and Erlend living in different countries?
It means there are two different lives to extract stories and ideas from. When we play new songs to each other it's a way of telling stories.

In the same way there are so-called rules for design and photography, do you think the same applies for music?
Totally. Probably even more so for music than for visual arts. If I could imagine all of the noises I could, there is only a thin strip of sound I would call music. And that strip is where certain rules of tone and rhythm are followed. There are thousands of books about the laws of music, but I haven't read any of them. I enjoy discovering the rules on my own.

Your writing and collating process between albums comes across as very well thought out – no rushing or label pressure. Is this a part of your personality as well as your musical process?
Yes, we don't like being told when to write a song. A song has to be something that has its own desire to live. It has to come from its own necessity. A song that was written because somebody just wanted to write a song is not a good song.

What kinds of experiences have you had in the past few years that will inform your next album?
My life changes all the time - and sometimes songs occur that describe what happened. I find music is better at describing small things than big things: I can't sing about life and love and death, but I can sing about a situation that lasted for five seconds and left me with certain thoughts.

How does coming from an academic background influence your work, both methodologically and content-wise?
It's more the other way around actually - I have been into music longer than I have been into books. In the world of academia I feel like a tourist, but I really feel at home in music.

If a psychologist was to review your work instead of a music journalist, what do you think they would say?
Ah! Great question. There is a lot of material for interpretation. There are a lot of similarities between therapy and writing songs. With both processes the issue at hand can be difficult, but the aim is some form of release. With the songs I'm most happy about, I have started off with a feeling of being trapped in something too big to handle but ended up as the master who is singing about it. It's a feeling of freedom.

You're passionate about urban planning and architecture – how have you been involved in that field back home?
I have a Masters Degree in psychology and my main interest is architectural psychology. This is the field of psychology that tries to understand how the physical surroundings affect our lives. I wrote my thesis about the effects of traffic and how the framework of urban life has changed completely after we introduced cars. All in all I think we were better off before the cars came in, because at that time all needs had to be accommodated in your neighborhood - whereas now, in most cities, you have to get into your car in order to get anything at all. I'm trying to write about this and speak about this as often as I can, and I'm also hoping to make a documentary called The Curse Of Cars. It's at a very early stage at the moment, but I hope I will be able to make it happen.

What book is currently sitting on your bedside table?
I'm reading the travels of Marco Polo. I love reading really old books. This book was written almost 800 years ago. It's basically a travel book of a world that doesn't exist anymore. It's interesting to realise how much the world changes. A lot of these big and magnificent cities that Marco Polo visited aren't there anymore.

Laneway Festival is one of the first festivals that you have played in some time – why were Australia and New Zealand chosen for this honour?
Well, I'm glad you look at it that way. That's a very polite way of asking why we have toured all over the world for more than ten years without ever going to Australia! We have been playing other places like Latin America, USA and Europe quite a bit also lately, but we like saving the best parts for later. That's why we are going to your part of the world now.

If you want to catch Eirik and Erlend live, Kings of Convenience are playing all of the Laneway Festivals in the coming fortnight (full dates and nab tickets here), plus sideshows in Melbourne at Hamer Hall on February 5th and Sydney at the Sydney Opera House on February 7th.