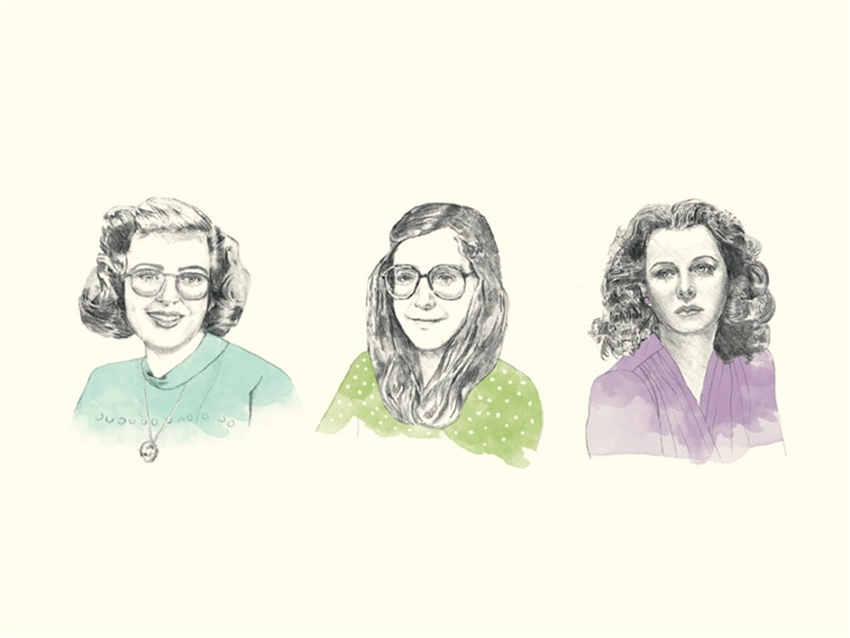 six lady nerds who changed the course of tech history 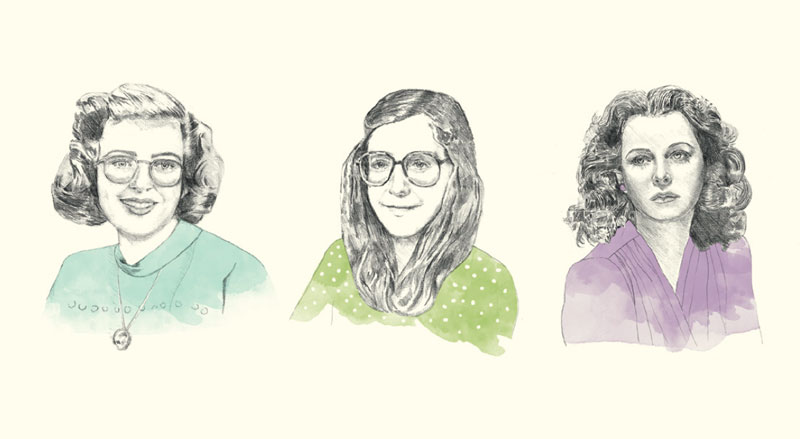 BETTY HOLBERTON, 1917-2001 When University of Pennsylvania grad Betty Holberton first started working in the industry, a computer was a job description, not just a machine. She was a ‘Rosie’ – one of a generation of American women drafted into traditionally male roles during World War II and named for their (literal) poster girl, Rosie the Riveter. Except Betty wasn’t working in a factory with a jaunty scarf on her head – she was one of six female ‘computers’ tasked by the US Army to work on ENIAC: the world’s first electronic general-purpose computer. These ladies were essentially programmers, and the machine they worked on was huge: 167m 2 and stuffed with 17,468 vacuum tubes, 7200 crystal diodes, 1500 relays, 70,000 resistors, 10,000 capacitors and something like five million hand-soldered joints. ‘Programming’ meant days fiddling with switches and cables, then more time debugging, with Betty and co often crawling inside the structure to find bad joints and tubes. Post-war, Betty stayed in machine land, working on America’s first commercial computer, UNIVAC (among other innovations, she changed the colour scheme from black to a grey-beige that became computing’s default hue for decades), and leading development on COBOL, the first language that let programs run on more than one computer.

MARGARET HAMILTON, 1936- In 1960, with a maths degree in her back pocket, working mum Margaret Hamilton took what was meant to be a temporary position at MIT in the not-yet-developed field of computer science. Her first job involved creating software that tracked weather systems (and Soviet aircraft) – and she was a bit of a whizz. Then Margaret joined a new project dedicated to the Apollo space mission and putting humans on the moon. Software wasn’t even mentioned in the original mission specs; there was no budget for it either. But NASA boffins soon realised there had to be a way to tell their spacecraft what to do, and in 1965 they put Margaret in charge, heading a team designing onboard flight software for the Apollo computers. In those days, programming meant popping holes in stacks of punch cards; once OK’ed, they were shipped off to a bunch of seamstresses who threaded copper wires through magnetic rings, literally hardwiring computer memory. As well as coining the term (and practically inventing the field of) software engineering, Margaret’s work is credited with preventing a landing abort three minutes before Neil Armstrong and pals were due to touch down on the moon. She now heads her own company, Hamilton Technologies.

HEDY LAMARR, 1914-2000 Austrian-born actress Hedwig Eva Maria Kiesler, aka Hedy Lamarr, spent the early 1930s in the German film industry – including a racy, nudey turn in the 1933 flick Ecstasy. At the time she was married to Friedrich Mandl, an extremely rich (and controlling) military arms manufacturer, who supposedly partied with Hitler and Mussolini in his fancy castle home and constantly talked shop in front of his young wife. Hedy fled to Paris in 1937, where she met Louis B. Mayer – who offered her a Hollywood movie contract. For the next 15 or so years she starred in films alongside Spencer Tracy, Clark Gable and Jimmy Stewart – and cycled through an eventual total of six husbands. But Hedy was intellectually bored. So when World War II broke out, she teamed up with composer George Antheil to develop an anti-jamming radio guidance system for torpedoes. Inspired by piano rolls and info from Hedy’s first husband, it used spread spectrum and frequency-hopping technology – which the duo patented – to keep the Allied signal network secure. The US Navy didn’t adopt the tech till the 1960s (it wasn’t too keen on actresses inventing stuff in wartime), but the same principles are now used by modern GPS, Wi-Fi and Bluetooth apps. 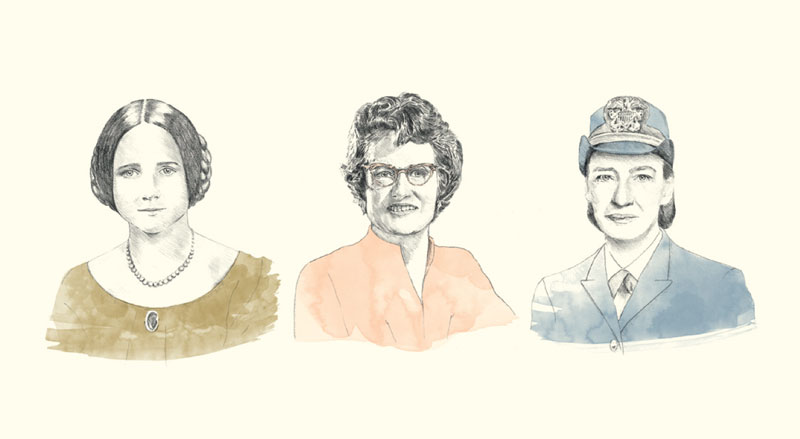 ADA LOVELACE, 1815-1852 As the only legitimate offspring of the notoriously bonkers poet Lord Byron, Ada Lovelace was encouraged from a young age by her bitter and distant mother to study maths and logic – as a kind of prophylactic against her dad’s insanity. Though she never knew her father, as his daughter she was famous in Victorian society and closely scrutinised for any sign of loose morals. Ada did occasionally get loose, as it turns out, but she got nerdy as well, and through a tutor became chummy with the man now known as the father of computers – Charles Babbage. So unlike most of her peers at court, she split her time between society events and practising what she called “poetical science”. A month into their friendship, Babbage invited the woman he nicknamed ‘The Enchantress of Numbers’ to study a prototype for his Difference Engine – an automatic mechanical calculator considered the world’s first computer. Ada was inspired. In 1843 she published a translation of an article on Babbage’s new idea for an Analytical Machine, which contained so many added notes and details it was practically a whole new thing. It also included a method for calculating a sequence of Bernoulli numbers – now recognised as the world’s first computer program.

DAPHNE ORAM, 1925-2003 An avant-garde composer and electronic musician, Daphne Oram was the first woman to design and construct an electronic instrument (and the first woman to set up a personal music studio). Having learnt piano and organ since she was a kid, Daphne began work as a music balancer for the BBC in London and got into what was then called ‘synthetic sound’: experimenting with tape recorders, sine wave oscillators and DIY filters. She also had ideas for orchestral works that would mix live and electronic noise. By the ’50s, she was a studio manager and had successfully campaigned the BBC to produce some 100 per cent ‘synthetic’ works – but the broadcaster was still too fuddy duddy for her, and in 1959 she struck out on her own with the Oramics Studios for Electronic Composition. Producing electronic background music for radio, TV and film – as well as installations and exhibitions – Daphne’s dream was to create ‘drawn sound’, where a composer could sketch symbols on paper and feed it through a machine that would produce sounds on magnetic tape. After nabbing a couple of music grants, she set to work in 1962, and by 1968 the first piece composed on the Oramics Composition Machine – “Contrasts Essonic” – was recorded.

GRACE HOPPER, 1906-1992 In a time when many American universities didn’t admit womenfolk, Grace Hopper earnt a PhD in mathematics from Yale in 1934 then took a job teaching maths at the all-lady college, Vassar. In 1943 she joined the US Navy Reserve and was assigned to work on the Mark I computer: a huge electro-mechanical calculator inspired in part by Charles Babbage’s Analytical Engine. For the time, it was lightning fast: it could do three additions or subtractions in a second, a multiplication in six seconds, and a division in 15.3. Grace took a lead role on the project, co-authoring several papers with the computer’s inventor, Howard Aiken, and overseeing its military uses – among other things it was used to calculate the viability of imploding an atomic bomb. After the war, Grace found herself working on UNIVAC, where she invented the first compiler (a program that translates one computer language to another) and argued long and hard for a kind of computing that went beyond mere arithmetic. She was a consultant for the COBOL project, which was partially based on her earlier language design work, leading to her nickname as the ‘Grandmother of COBOL’. Grace also kept up her work with the navy and retired at the rank of Rear Admiral.

This curious piece of tech history was originally published in 2016, in frankie's 70th issue.