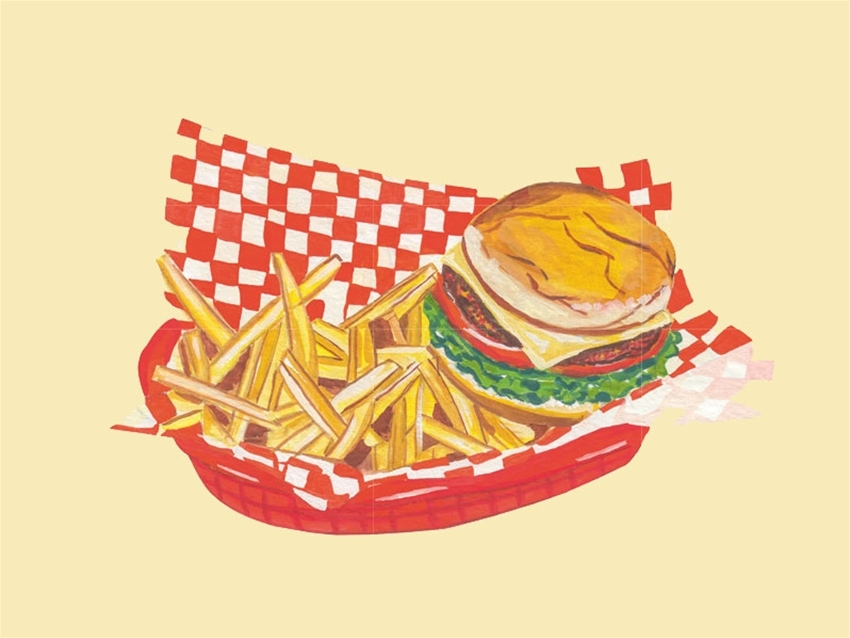 By deirdre fidge and caro cooper

In the name of science, Deirdre Fidge and Caro Cooper try out some classic hangover cures.

In the name of science, Deirdre Fidge and Caro Cooper try out some classic hangover cures. 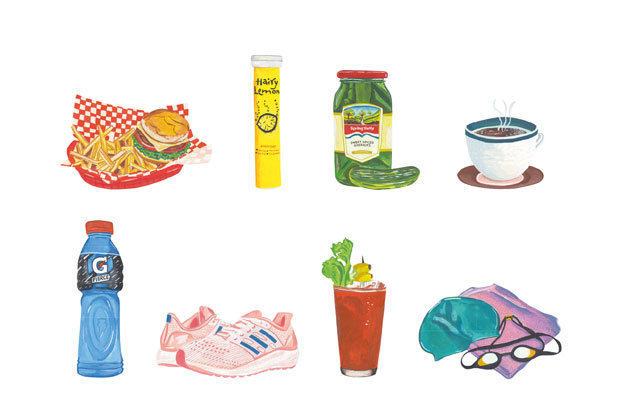 GREASY FOOD
When I first started drinking, a friend’s father suggested we should eat burgers and chips the day after a party. His logic was that the oil would “soak up” any remaining alcohol in our system. Now, I’m not a medical expert, but surely 12 hours later the pre-mix mango and vodka syrup would be out of the stomach itself, and if not, wouldn’t the oily potato simply sit on top of everything, creating some sort of horrible toxic soufflé? The Dietitians Association of Australia refused to accept my hand-scrawled requests for confirmation, so I tested it out myself. One burger the size of my head, one side of chips the size of two heads (they were generous servings), and a small vat of tomato sauce, please. I could feel my serotonin levels spiking after just one bite. Did my friend’s dad have a point? How was I managing to eat all those chips? Regardless of the science, greasy food works. DF

HAIR OF THE DOG
I don’t like day-drinking. A glass of wine in the afternoon or mimosa at brunch sends me into child-like fits of sleepiness and accompanying crying jags. I felt even less like drinking after a night of martinis and – when the money ran out – several pots of beer. Like a true professional, though, I faced up to my job of knocking back a Bloody Mary, and was surprised by how easily it went down the gullet. Only minutes before, I’d been planning to bury myself in a hole, but the combined powers of alcohol, tabasco and tomato juice lifted my spirits. Am I recommending more alcohol as a cure for alcohol poisoning? A little, but be warned: I crashed out after breakfast and woke up around lunch feeling like my body had made little-to-no progress in processing any of the booze coursing through it. CC

SWEATING IT OUT
This one is hard. Harder than The Rock’s biceps. When I woke, I wanted only darkness and grease-slicked food. Instead, I pulled on my Kmart sports bra and leggings, hating every inch of the bare-all lycra. I didn’t bother with headphones, because my brain was shrinking from the alcohol and any noise hurt. Hungover running is a special kind of hell. The thud of my heels on the pavement juddered through my skull; my limbs were lead; my sweat was 90-proof. But as it beaded on my skin and my lungs diligently flushed air in and out, I felt increasingly awake. By the time I’d finished a limp around the oval, my skin was flushed, my forehead sweaty and I’d turned the metaphorical corner. Apparently, sweating works. The caveat is that it’s good for a low-level hangover – if you’ve spent the night on the bathroom floor, don’t try it. CC

GATORADE
Electrolytes! Hydration! Replenished minerals! Are you impressed by my very scientific-sounding buzzwords? (It’s OK, you can admit it.) If there’s anything I’ve learned from years of advertising consumption, it’s that product labels are 100 per cent accurate and can always be trusted. Sports drinks are especially fond of highlighting the superpowers supposedly contained within – which is where the aforementioned buzzwords come in. It makes sense for a hungover husk of a woman to need some rehydrating after a night on the turps, so I crawled up to a drinks fridge at a local milk bar and made my selection. As everyone knows, blue is the most powerful colour, so I gratefully poured the coolant-hued Gatorade down my throat. Was I an athlete now? Were my electrolytes back under control? Those questions remained unanswered, but the 28 grams of sugar certainly perked me up enough to enjoy my saunter back home. DF

PICKLES
I was a little confused by this. Aren’t pickles a pregnancy craving thing, rather than a hangover cure? With some googling, I discovered the salt in the juice is supposed to help top up electrolytes in a dehydrated, aching body. It took a few minutes of staring at the jar in the morning before I felt ready – mentally and physically – to tackle the challenge. (If I’d had a chip butty to put the pickles in, I would have been more receptive to the tart, pungent burst.) The first dill pickle was not fun, but by the time I finished my third I was getting into it… until I took a sip of the juice from the jar. Cue my pickle crash – I’d overdone it. The sight of the container suddenly made me queasy. I rinsed my mouth out and headed back to bed, the image of laughing green pickles dancing in my head. CC

BLACK COFFEE
I’d like to start with a sincere apology, as this review makes reference to a not-so-savoury bodily function. Some call it ‘number two’; some write books about it called Everybody Poops. So, there it is. Hangovers in your late 20s are more of a Day of the Dead-style situation than a casual headache – your whole body screams at you, pleading sweatily, “Why have you done this?!” And you can only flail your arms in the air, weeping and whispering, “I do not know,” at your blotchy, unwashed face. Sundays are rough. You need a purge. You need to rid your body of any remnants of happy hour, two-for-one shots and mystery cocktails. Enter: strong, black coffee. No sugar (you don’t deserve any). Take a sip and wait for the inevitable bowel movement that follows. It’s not a pleasant way to start the day, but you’re one step closer to ridding yourself of this hangover. Godspeed, and again, I’m sorry. DF

HAIRY LEMON
I didn’t know Hairy Lemon still existed. I thought it disappeared in the ’90s, along with guarana, Berocca, No-Doz and two-for-one pots of VB at the pub on a Thursday night. I bought the effervescent tablets as though they were a bottle of lube or laxatives – furtively, nervously, and definitely hidden in a paper bag. Maybe I thought I was too good for it or something, but I wasn’t too good for anything after a bottle of red wine and no dinner the night before. The lemon volcano in my glass made my saliva glands work overtime, the way they do before you vomit. I can’t say drinking it was much better, either. Was I on the mend? Probably not. But I managed to sweep the floor and change the sheets, which is no small feat on a sober day, let alone a hungover one. CC

SWIMMING
Salt water from the ocean contains natural healing properties. I know this from reading about hair products made with sea salt, and following attractive strangers online who take a morning dip in Bondi each day. Unfortunately, during my last hangover, the closest body of water was not a sparkling blue sea but a chlorine-filled suburban swimming pool that almost definitely contained multiple band-aids and an unthinkable amount of dead skin cells. While I can hypothesise that stepping from powdery-soft sand into a crashing wave would be beneficial to the body and soul, I cannot pretend that a jumbo bathtub full of mystery hair offers any benefit whatsoever. Unsurprisingly, a headache is not aided by artificial humidity and yelping children. When I’m feeling fragile, my patience – much like this pool’s hygiene standards – runs low. I give this hangover cure half a star, and that’s only because the snack bar sold hot dogs. DF

Dee and Caro bravely put their bodies on the line for this feature, which can be found in frankie issue 87, on sale now. Nab a copy here, or subscribe from $10.50.