The ASH Podcast is a sex-positive resource for First Nations folks. 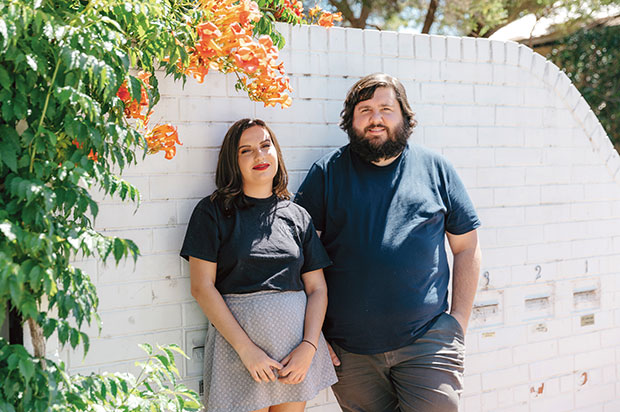 Let’s talk about sex, baby. That’s what South Australians Dominic Guerrera and Sasha Smith do every time they get together and record an episode of The ASH Podcast (which stands for ‘Aboriginal sexual health’). The show started off as a solo project for Dominic – a Ngarrindjeri, Kaurna and Italian man – but quickly evolved into something bigger. “I’d worked at a South Australian family planning clinic for six years, which was predominantly a sexual health service for white women,” he explains. “They really struggled to find space for Aboriginal voices, so I wanted to create something that was made by Aboriginal people for Aboriginal people.”

His chosen platform was a podcast. “I started doing interviews with people, but I wasn’t really happy with it,” he says. “I felt the show needed to be something more. I started talking to a friend about maybe having a co-host, and she suggested Sasha. The rest is history.” A year on, the show sees Dominic and Sasha – a Boandik woman, writer and sex worker – dissect everything sex and relationships. They go beyond the typical topics of STIs and contraception to talk about stuff like polyamory and gender identity, chat with expert guests, and often give listeners advice. Basically, they’re making the resource they wish they’d had access to as young Indigenous folks.

“I grew up with extremely religious parents, so I didn’t have access to a lot of sexual health information,” Sasha says. “It was really just through sex ed at school, and the internet, TV and movies. If something like this had been around when I was younger, I think it would have been good for me.” Dominic agrees: “During my teen years, I never saw representation of Aboriginal people in relationships, let alone having sex. Now there’s a lot more of that, which is great, and it’s coming from Aboriginal people.”

The ASH Podcast aims to fight shame in all its forms – something Dominic connects to stifled Indigenous culture under colonial control. “There’s so much shame and stigma attached to sexual health that directly links back to colonisation and attitudes towards our bodies and sexuality,” he says. “We’ve been told we’re not worthy so much that we now say it to each other and to ourselves. It prevents people from getting a cervical screening or STI check-up, or coming out and being proud of who they are. This podcast is part of decolonising our sexual health and identity.”

Sasha’s profession as a sex worker is also an important aspect of the show. She’s been working for four years and ‘out’ for two, and is passionate about sharing her knowledge of the industry and dispelling stigmas. “When I first started sex work, I felt a lot of internalised shame,” she says. “I decided I didn’t want to spend my life being ashamed, because I felt fine with what I was doing. If I’m able to help other workers be open about it, that’s a good thing.”

The podcast is still fiercely DIY, recorded on Sasha’s bedroom floor, but the pair has grand plans for future live events. “We want to bring in some fun elements, like condom demonstrations,” Dominic says. Making The ASH Podcast has had a positive impact for both Dominic and Sasha – “I’ve been crowned ‘the sex man’,” Dominic laughs – as well as their communities.

“I’ve always been known within my family for being quite open,” Sasha says, “but not as open as I am now, being able to discuss sexuality and sexual things.” Dominic has found a similar sense of liberation from the project. “Working in health, there’s always a lot of restrictions because of governments and funding, and not wanting to rock the boat,” he says. “It’s great to have a platform where I can speak my mind, and invite other people to speak their minds and have really open and honest conversations, too.”

This sex positive chat comes straight from the pages of frankie 94. Pick up a copy at your closest stockist, or subscribe here.