how we became friends

Making new friends can be tricky business. Oftentimes it involves being open and vulnerable with a good measure of awkwardness thrown in. But boy, does it pay off when you make a buddy for life! We asked a few of our favourite creative people to share how one of their best friendships started and to commemorate it, we printed a cute photo of the two of them using the new Fujifilm instax Link WIDE smartphone printer. 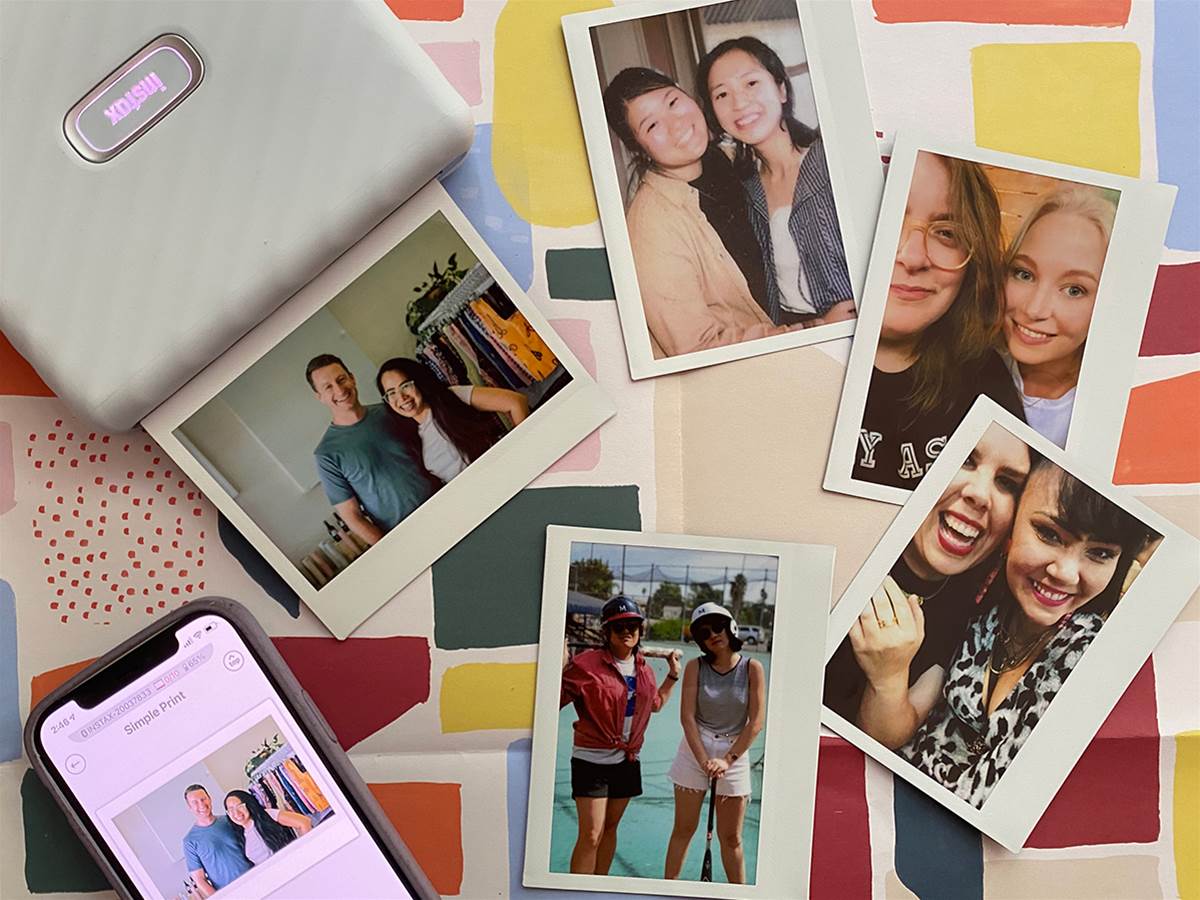 emma do, editor
I left high school with total faith in my academic abilities. I had major nerd powers, and I was proud of it. But alas, my kryptonite, as the cliché goes, was socialising. Attempting to converse with a stranger nearly always brought on an internal meltdown, so I avoided it as much as possible. By some miracle, I managed to make one friend in uni – and she’d turn out to be a lifetime best pal. Outgoing and chatty, Nu kindly invited me out to lunch after our lectures. The first time we hung out, a bird shat on my neck. Nu laughed so hard, her face turned bright red and she had to dash to the bathroom to reapply her smudged eyeliner. It’s always a good sign when someone finds you funny. Somehow, we’ve been best buds ever since, travelling the world together and pulling each other out of hard times with poo jokes. I always wondered why she approached a raging introvert at uni. Apparently, it was because of how I dressed back then. I might not have said much, but my polka dot pants, aqua cardigan and flowing purple headscarf did all the talking. Nu, in her galaxy print tights and glitter-covered Doc Martens, found a kindred soul in my chaotic style. It’s proof, then, that going through a bad style phase can pay off. This photo was taken at an art event in Melbourne, 2021. It’s one of the few (good) photos we have together.

tahnee edwards, creative
I met Kristy in 2018 after she purchased a ‘Respect Blak Women’ jumper off my website Gammin Threads. I had only launched a few months earlier, and totally fan-girled out as I loved her jewellery brand Haus of Dizzy. She promoted my business on her Instagram and a few months later she asked if I wanted to run a pop-up shop with her, which I jumped at. We met up to plan it and made a connection straight away bonding over fashion, music and running a small business. It was so good to talk to someone who was killing it with no business education – just learning along the way. Kristy is one of the most supportive people I know – she will help anyone out and she’s always amping you up or name-dropping you in interviews or for possible opportunities. She’s also an amazing cook and always offers you a deadly feed. 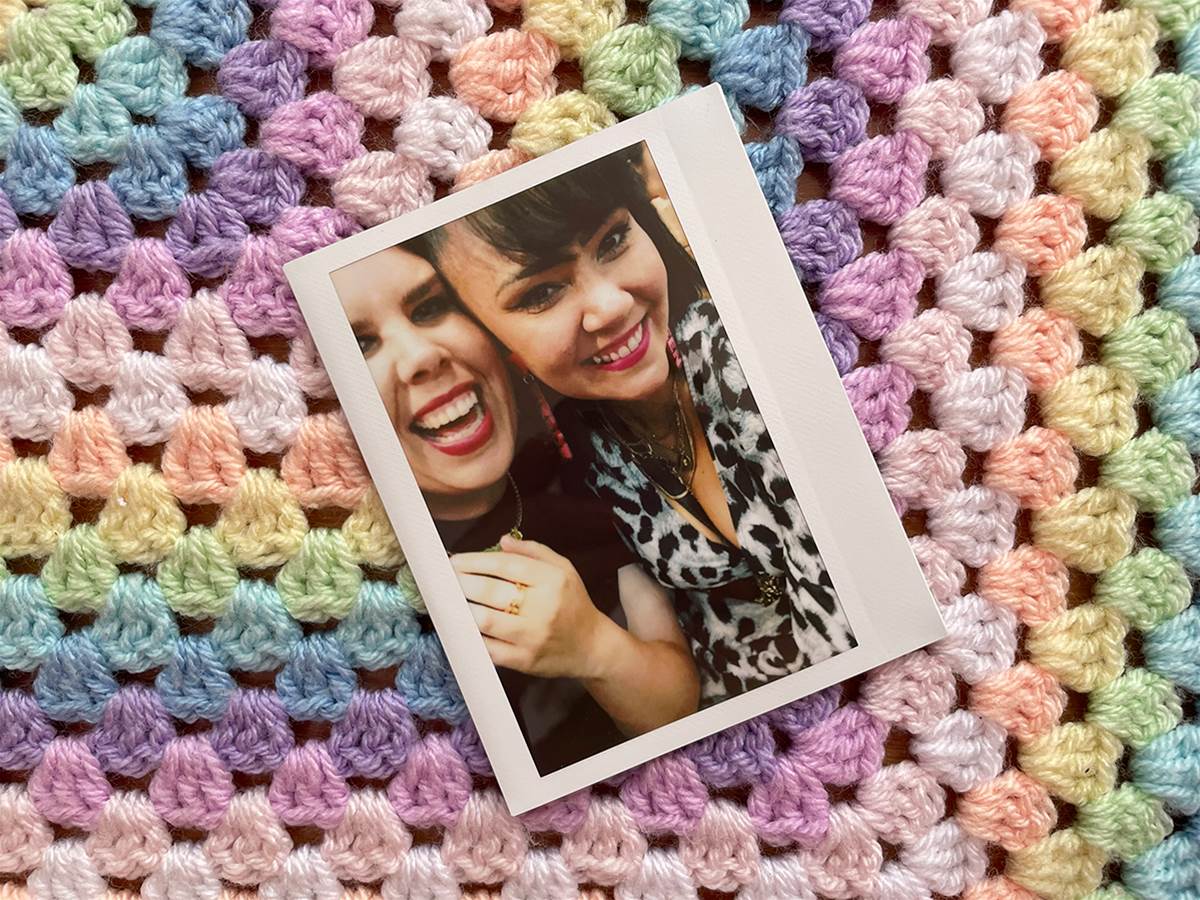 This photo was taken at The Miseducation of Lauryn Hill 20th anniversary tour. Kristy had designed some jewellery for her so we got to meet Ms Hill backstage. Sis had a few wines and kissed her hand when she met her! It was so funny and awkward. We still laugh about it!

michelle law, writer
When I first started screenwriting, my agent set up a meeting between myself and another emerging creative – a director named Corrie Chen. We were immediately suspicious of each other, frantically googling the other person before meeting on Skype: “Is she even any good? Are we only being introduced because we’re both Asian women in the industry?” Turns out it was the best matchmaking job ever, because from the get-go we had an innate understanding and appreciation of each other’s craft. That led to working on a short film together, and then a documentary, and then countless projects after that. Fast forward a decade and not only is Corrie still my closest collaborator, she’s also my best mate and someone I’d consider more of a family member. It’s rare to have friends who bear witness to how much you’ve grown as a person and artist, and feel proud of you, and happy for your successes. I feel very lucky to have her in my life. And even though we live in different states, we talk every day – sending each other stupid memes, screaming into the void about work, or reminiscing about that time we accidentally drove into oncoming traffic in LA and lived to tell the tale. This photo was taken on that same trip to LA, in 2018. In-between work meetings, Corrie and I had a list of “American" activities we wanted to do: see the Hollywood sign, attend a stadium concert, go to Disneyland, and to play ball. In this photo, we wanted to look badass, but the reality is we were shrieking and cackling as baseballs came hurtling towards us in a batting cage.

waan pivasiri, business founder
It was 2007 and I’d just transferred into a new university in the middle of my first year. Not only did I have to make new friends, but I had to make friends with their friendship group as well. So much work! I noticed Vaughn in half of my classes and one day bumped into him at the train station. The guy was eating takeaway Japanese curry while waiting for the train. I said hello. He had his mouth full so we did the whole “I’m chewing / oh sorry” hand gestures. Turned out we were on the same train line and lived a few stations from each other. Being pretty awesome human beings, we quickly became good friends and were on each other’s MySpace ‘top friends’ list. Throughout uni Vaughn read all of my emo MySpace blog posts, carried me through Intermediate Programming (the tutor actually said, “you know Vaughn won’t be able to help you during your exam” and I got a credit for it, so, ha!) and had my back when the same tutor told me I was weird while I was handing out lollies in the shape of eyeballs and brains in class – they were Halloween lollies! Ugh! I’m glad he’s still on my ‘top friends’ list, 14 years on. In this photo we are celebrating You, Me & Bones’ shop opening in Reservoir, Victoria.

deirdre fidge, writer
When I was younger, I was warned about the dangers of meeting somebody from the internet. Thankfully, I ignored that advice, because otherwise I never would have met Bec. Bec and I had followed each other on Twitter for a couple of years before we met in person. Much like Romeo and Juliet, we were star-crossed lovers (friends) belonging to fierce rival families (Sydney vs Melbourne). Initially, our mateship existed only online. But one year, she was invited to Melbourne as part of a writers’ festival, and we went for a drink after her event. The rest, as they say, is history. While I can’t remember what we first talked about, I remember laughing so hard my face hurt, and feeling absolutely smitten. Over the past seven years we have travelled together, worked together, shared good news and tragedies, spooned, laughed, cried, danced, Zoomed, Skyped, FaceTimed. As I get older, I realise that friendship is not that different to romance. I feel so lucky that it was love at first sight for me and Bec. Or rather, love at first site? Oh no, a pun. She must be rubbing off on me. Bec and I still live in different cities, so cherish the times we can hang out in person. This photo of us was taken during the brief period between lockdowns this year and I was sure to stock up on hugs while we had the chance.

This article was presented by Fujifilm instax and the new instax Link WIDE smartphone printer, which allows you to print high-quality instant photos directly from your phone in a bold wide format. Take a squiz at the snazzy new range on the instax website. 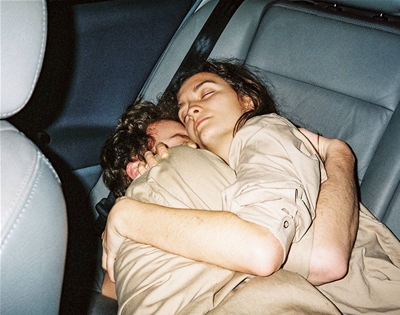 rant: tell your friends how cool they are