five films to watch when your bestie is away 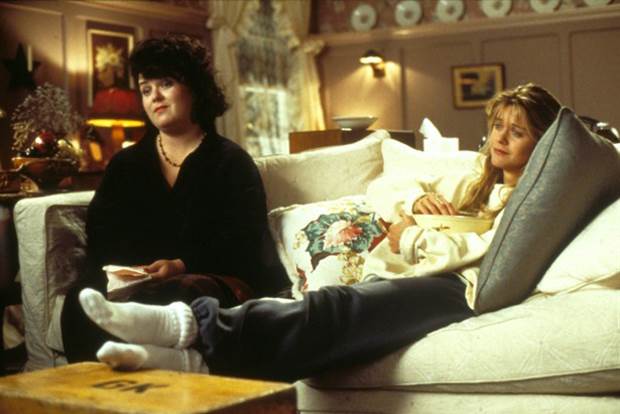 My best friend lives in Botswana – she chases cheetah there. We try to talk whenever we can about life and feelings and stuff and things, but there’s an entire night sky between us and it sometimes keeps us apart.

I don’t miss her like I used to. I am used to life without her. But my heart still aches when I think of all we haven’t done and all things we won’t do together, because she is there and I am here (and I can’t chase cheetah – I’d be no good at that).

OK look, there are many different types of love. And sure, you might not heart your bestie in the way that Tom Hanks hearts Meg Ryan in this movie. BUT, Sleepless in Seattle is still so good and so funny and so achingly about distance between people that it would be very hard not to include it on this list. Plus, any list with a movie by Nora Ephron on it is automatically a GOOD LIST. Thank you, give me a prize.

My best friend is not a volleyball, but I do not hold that against her. If there’s ever been a truer friendship than the one between Chuck Noland and Wilson, the inflatable sports sphere, then I am yet to see it. When Chuck finally makes it off his deserted island – after being stranded for years because of a plane crash – he makes sure to take Wilson, his only friend (and only volleyball), with him. When Wilson himself is cast away and falls off the escape raft, Chuck is distraught at loss of his friend. Feelings.

There are maybe three different types of bestie: (1) the ones you’ve known forever, (2) the ones you meet and lightning strikes and it’s a bit like falling in love, or (3) the ones you go on very strange quests with (or you’re brought together by disaster or stress or misfortune, but it still WORKS dammit). In Finding Nemo, we definitely have a NUMBER THREE situation with Marlin and Dory, and it’s beautiful and it’s underwater and, best of all, it’s a happy ending.

Look, I’m not a boy (nor have I ever been one), so the idea of searching for a dead body as a bonding exercise with my friends doesn’t really make sense to me much (sorry, everyone, but especially to the plot of Stand by Me). What does make sense to me now, as a grown up, are Richard Dreyfuss’s melancholy reflections on childhood: “I never had any friends later on like the ones I had when I was 12,” he says at the film’s closing. “Jesus, does anyone?” Amen to that, Richard Dreyfuss. Amen to that.

Does anything bring friends together like BOARD GAMES? (The answer is yes: many things bring friends together other than board games.) In Jumanji, it all starts innocently enough – what’s a board, a game, and dice between friends? But it all goes horribly wrong when Alan gets sucked into the game and Sarah gets chased by bats. Alan has to wait 26 years before he’s rescued and finally reunited with his bestie.