We were chuffed to talk to Broken Social Scene for the new issue of frankie – so chuffed that we decided to take a wander down musical memory lane, and remember how the Canadian collective came to be (and remained) so frigging awesome.

We were pretty darn chuffed to have a deep and meaningful chinwag with Broken Social Scene’s sort-of frontman, Kevin Drew, for issue 79 of frankie – so chuffed that we decided to take a proper wander down musical memory lane, and remember how the Canadian collective came to be (and remained) so frigging awesome. 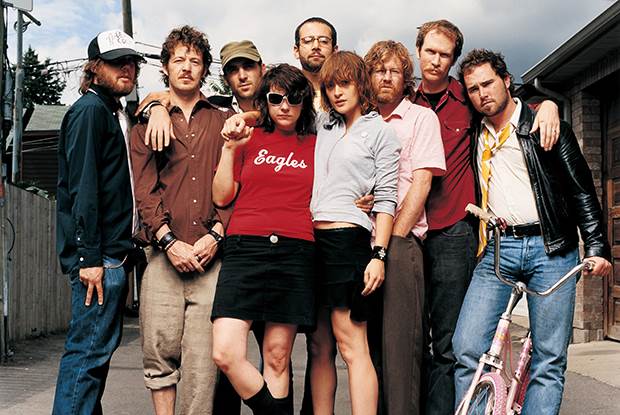 Did you know that one of the founding members of Broken Social Scene was also in Len, the band behind the ’90s one-hit wonder “Steal My Sunshine”? It’s true – Brendan Canning played alongside Marc and Sharon Constanzo before he teamed up with Kevin Drew and Charles Spearin, who’d been playing together as KC Accidental, to form one of Canada’s most prolific indie rock bands in 1999.

Pretty good bit of trivia, right? But also, considering the nature of Broken Social Scene’s members, maybe it’s not surprising. The collective has been a revolving door of top-notch musos since it started, and over the last two decades has counted the likes of Feist, Stars’ Amy Millan and Metric’s Emily Haines among its members. It’s not an exaggeration to say that Broken Social Scene were a crucial part of making the Canadian music scene – especially in Toronto – what it is now.

Broken Social Scene is a community – with a whopping 15 members today, and up to 18 in the past, there’s no other word to describe it. With members coming and going over the years, and their own side projects on the go at all times, Broken Social Scene is like a summer camp for cool indie rockers to get together, make some sweet tunes, and feed off each other’s energy.

They dispel traditional notions of what a band should be, living up to their name. In the band’s bio, This Book is Broken, Emily describes them as “permanently broken” – in a good way. “Every interview I’ve ever fucking done has asked, ‘Is Broken Social Scene breaking up?’” she says. “But you can’t break something that’s already broken… The only way you could destroy it would be to actually fix it.”

It’s a hodge-podge setup, but it works for them – and without Broken Social Scene, bands like Arcade Fire and The Polyphonic Spree, with their sprawling line-ups and weird, experimental sounds, wouldn’t have had a precedent set for them to achieve mainstream success.

And then there’s the music itself – grand in its scope, textured and intricate but accessible, with lyrics that are at times abstract, and at other times cuttingly relatable.

Anyone with even a passing interest in indie rock in the mid-2000s will remember the iconic refrain from “Anthems for a Seventeen-Year-Old Girl”: Park that car, drop that phone, sleep on the floor, dream about me. The song was also included on the soundtrack to Edgar Wright’s awesome film Scott Pilgrim vs. the World in 2010.

Feelings queen and ruler of the known universe Lorde is also a fan; in 2013, the New Zealand singer made a sneaky reference to Broken Social Scene’s 2002 song “Lover’s Spit” in her own banger, “Ribs”: The drink you spilled all over me / “Lover’s Spit” left on repeat. She channels the feeling of loss and angst in the original song, while making it fully her own.

With each of their albums, Broken Social Scene brings something new to the table – maybe an inevitability when there’s so much revolving talent bringing it all to life.

In This Book is Broken, founding member Brendan Canning says, “Because this band has always followed its natural path, it’s hard to predict with any certainty what’s going to happen to us next.” For a while, it did seem like 2010’s Forgiveness Rock Record could have been their last will and testament – and if it was, it wouldn’t have been a bad way to go out, with some of their most ambitious and luscious soundscapes yet.

But in 2017, they’re back – Hug of Thunder is their latest album, brimming with all the things that make Broken Social Scene such a unique, exciting part of the musical world. The title track features Feist’s first lead vocal for the group since 2006, and the whole thing is dreamy, joyous and celebratory – all the things we love about this band.

At the end of the day, the best thing about Broken Social Scene is that it’s a labour of love from a group of friends making music together. You can sense their elation when you listen to their songs, or watch them play.

As Kevin Drew said to Pitchfork, “If you’re going to do it, do it together.”

Nab a copy of issue 79 of frankie to read our chat with Kevin Drew, in which the very talented fellow relays the merits of smashing your phone and explains how to let go of regret.

tunesday – hanging out with bumpy